Justice to  Shipra at any cost

Braving natural disaster, thousands of people, representing all walks of life, joined the "Protest March" led by Hindu Samhati at Barasat to get justice for Shipra Ghosh, victim of gang rape and murder by Ansar Ali, Enamul, Rezzaq and Shaukat Ali.

How strong emotions can be got evident today itself when the entire Chanpadali More became standstill owing to the virulent protest. Not a single person was found to express his/her dissatisfaction even if the traffic just remained a dead lock there for hours.

And all these took place even if the police and administration left no stone unturned to subdue the same defiance. Apart from deployment of a large police contingent, special forces were also posted adequately to retain the saga of Secularism above all.

What amazed protesters and also bystanders was the temperament of police officials – ready to crack down on them – a spirit whose presence could have enabled Shipra to live a good life. And all these let loose a huge protest, joined by more than 250 lawyers from Barasat court in uniform, enabling Hindu Samhati to submit its memorandum to the District Magistrate at 4 PM.

(Please see Memorandum and Leaflet below) 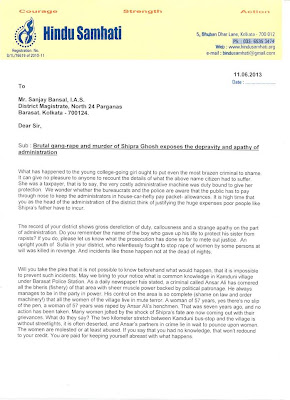 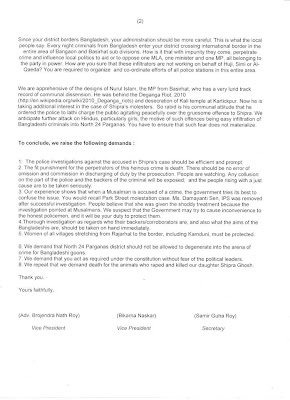 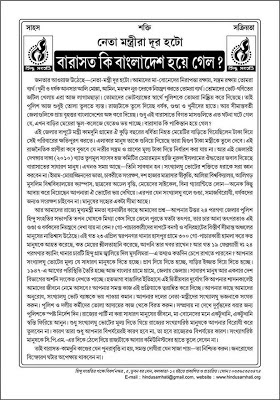 Anonymous said…
it was a pregnant silence,by the topmost.giving compensation which in any case has to be given will not solve the problem.What is required that a logbook be created at every P.S. or govt. office where the common man can inform about these hooch dens or spots where these hooligans assemble.Or an online logbook where people need not mention their identity.And once
reported concerned P.S. is answerable why action has not been taken.The media to serve as a watchdog.This is to facilitate our police who otherwise ca nt spot the growth of these spots,where yougster prefer to drink in public and then have drunken brawls and other illegal activities.
Also let us change the tactics,of asking policemen to be suspended.But ask pointedly to those policemen to be in the heat of things and go for the arrest of these criminals of course trailed by a posse of proper policemen.
June 11, 2013 at 10:58 AM