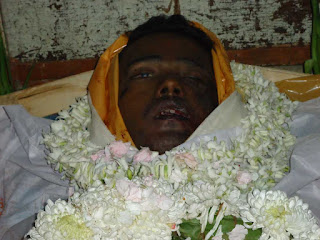 Dipankar Roy, 22 years old (Hindu) was brutally murdered as he had married Salima (Muslim). Both of them had been in love for a while. The victim was riding his motorbike coming back from Chandpara to his own house, when he was lynched and shot dead by Muslim activists led by Aamir Mandal, a member of the local Islamist organization. Dipankar's body was found in a pool of blood and bore multiple bullet wounds in the chest, abdomen and shoulders. But West Bengal police has not bothered to arrest the murderers, as there is intense pressure from the local Muslim religious bodies. Instead, the police is trying to shield the perpetrators. District: North 24 Parganas. Subdivision: Bongaon. Near the Bangladesh border. 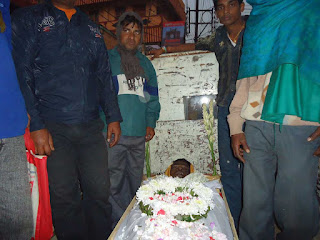 To See The Full Pictorial, please visit the South Bengal Herald link given below.

The nauseating and partisan act of the Administration in West Bengal to appease Muslim community became absolutely open on December 5th, 2012, 05/12/2012 when the relatives of Dipankar Roy, who was killed by Aamir Ali on 03/12/2012, went to RG Kar Hospital morgue. At first, Shri Malay Roy (cousin brother of the victim) and Shri Haridas (brother in law) remained unattended for several hours. Later, when they insisted for the dead body, local police under Tala police station informed them, off the record, that it is instructed from the higher position to delay the process so that no sentiment can be created amongst Hindus while returning to their home town.


To aid the Muslim activists, the West Bengal police, under pressure from the local Muslim clergy-mafia nexus, is now barging into Dipankar's house and intimidating / creating mental pressure upon the family members of the victim to cremate his body in the dead of the night without post-mortem, to avoid any further investigation into this issue.


Later, the body of the victim was brought at Barasat. Activists of Hindu Samhati paid their homage to the victim. Then similar kind of program was also organized at Chandpara, Nera Pukur Pas en route to their house.


Late in the night, police came to the house of the victim and forced the family members to perform the last rites in the night itself as the Administration was scared of any communal tension in the area arising out of the cremation of the victim. Sisters and brother-in-laws of the victim strongly turned down the proposal of the administration and stuck to their demand for cremation in the morning. Then, local MLA (member of legislative assembly) came to their house at around 2330 hours and again, for half an hour, tried to convince the family for early cremation but it went in vain.


On 6th December morning, family members proceeded towards the crematorium. Over  two hundred Hindu Samhati activists and hundreds of  supporters were present.

Police had been deployed in huge numbers, especially in front of houses of Hindu Samhati activists. 500 plus people blocked the road in front of SDPO office at Bangaon town, as they carried Dipankar's corpse. They also demanded immediate arrest of the killers of Dipankar.