Worst fears of Hindus are coming true! Witnessing the lackluster attitude of the local administration it was felt that in spite of the presence of stringent court orders (passed by Hon’ble Calcutta High Court, 2010 and Hon’ble Supreme Court later – strengthened in latest order passed by C.J. Mr. Jay Narayan Patel on 2nd Nov.2011) against cow slaughter, becoming more and more prominent on each Eid-uz-zuha or Bakra Eid, the administration would do nothing.

And the same is taking place on the whole. Thousands of makeshift markets flaunting merchandising of healthy cows have opened all over Bengal and even in some areas Islamic ruffians have already started to behave with Hindus ostentatiously. Where is the Hindu sentiment and religious belief then? It happens to be the greatest casualty to the existing governance and once again it is proved, no government in India even dither to hurt Hindu conviction ever.

How disgraceful can the attitude of the government in this context be is best found from the Order issued (on 03.11.2011) from the Office of the Sub-Divisional Officer, Diamond Harbour, 24 Paraganas (South), Govt. of West Bengal. It contains do’s and don’ts and official recognition of Bakra Eid and its sacrificial meat flouting the decisions of the Hon’ble Judiciary in India. It is worthwhile to mention, more than a thousand copies of this notice has been pasted on the walls of houses of that village by police. The whole intention of this order is only to threaten the Hindus and keep them inside their houses who may dare to ask the administration to implement the land's highest court's unambiguous order to stop Cow Slaughtering on the occasion of Bakra-Eid. That means, directly flouting Supreme Court and High Court orders, administration is taking every measure to ensure smooth and unhindered Slaughtering of healthy Cows on the occasion of Bakra Eid. This is called applied 'Secularism' in our country.

Laws of Union of India are effete to save Hindus – history will take its own course. 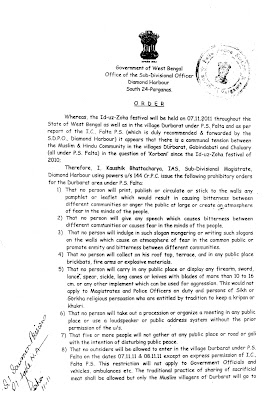 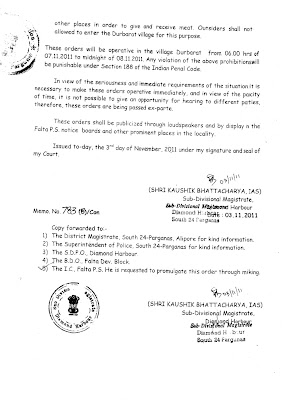