March 31, 2012
Partition of India in 1947 forms one of the darkest chapters in the history of Indian subcontinent but unfortunately, only a few chapters of that gruesome tale, pertained to Bengali Hindus, has been unfolded yet. And there can’t be any second thought in this regard. While contemporary journalists along with historians and political scientists, owing to weird reasons, refrained from exploring partition-related facts, there was no effort in the following ages too. What’s more important, witnesses of those carnages, especially genocide of 1950 in East Pakistan, remain silent still. Only a few of them have become vocal of late but it’s less than essential yet.
Nevertheless, even if there are a few available facts of Barisal genocide, 1950, they do confirm how religious bigotry of Muslims or savage Islamic fundamentalism succeeded to exterminate and uproot Hindus there racially, followed by in rest of East Pakistan soon.
What happened in 1950 was quite different from partition riots in 1947, where two warring communities in then undivided India fought face to face mostly, even if bids to racially exterminate others completely were also taking place. On the contrary, East Pakistan genocide of 1950 refers to mass execution of Bengali Hindus by Muslim mobs, the Pakistani police and the para-military force accompanied by arson, loot, rape and abduction in the months of February and March 1950.
In accordance with both governmental and non-governmental sources, no less than 1 million Bengali Hindus were forced to migrate to India by the end of 1950. Connivance of then Pakistani administration, calling the shots in both West and East, played the most crucial role here. Genocide, to be precise, took place in various areas of East Pakistan like Kalshira, District:; Nachole, District: Rajshahi; but the carnage in Barisal district surpassed others.
In the district of Barisal, riots commenced on 13th February and within a few following days Hindus were killed, raped and abducted at random. As said by the press note of then Government of East Pakistan, two anonymous youths began to spread aggressive rumors on the afternoon of 13th February in the town of Barisal. This led to closure of many shops. Another rumor– murder of Fazlul Haque in Kolkata also played a nefarious role.
Liberal sources confirm that eight places, at least, were set on fire during the same night. Soon 30 houses and shops were reduced to ashes and ten persons were brutally burnt. The situation worsened more following 16th February when indiscriminate loot and arson of Hindu properties initiated in Gournadi, Jhalakati and Nalchiti under Sadar sub-division of Barisal district. None can believe that Hindu passengers on the water route between Barisal and Dhaka were killed within the steamer and corpses were thrown into the river. But it is a reality.
A great number of Hindus, fleeing for life, took shelter in the police station in river port of Muladi in Barisal district. But no mercy was shown to them and they were attacked later within the police station compound. Most of them were killed in a flash. A revered Hindu school teacher was roasted alive by his Muslim students; they were found to dance at that time.
Here is another incident. In the village of Madhabpasha, under Babugunge police station presently Babuganj upazila, District Barisal, three hundred Hindus, if not more, were rounded up by a Muslim mob. Hindus were forced to crouch in a row; their heads were lopped off separately with aramda (traditional village weapon).
An assortment of chronicles confirms that alleged low-caste Hindus did not flee from East Pakistan en masse like high-caste Hindus even in 1947. They had the hope to live in their ancestral villages but Barisal genocide, 1950 shattered all hopes once and for all.
Three Bengali Hindu ministers – Shyama Prasad Mukherjee, Kshitish Chandra Niyogi of India and Jogendranath Mandal, Pakistan resigned protesting against governments’ failure to protect Bengali Hindus in East Pakistan.
Even if killings decreased with the signing of Delhi Pact between India and Pakistan to ensure security of the minorities in the two dominions, substantial expulsion of Bengali Hindus from East Pakistan was completed by then. What remains these days is nothing but a deep scar that can’t be nursed ever. 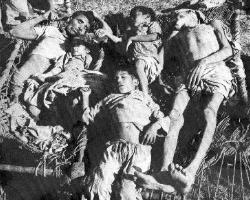 ARYAN said…
My ancestral home is also Barisal.Though I am an Indian but I am a human to have sympathy for the Bangladeshi Hindus. Its high time that we the Hindus of Bengal have to start a mutiny for our self protection because the government have never done anything for the Hindus. Even if we protest we are being deemed as fanatics,so its better we stop relying on the government rather get united and do whatever is necessary for our protection.
April 1, 2012 at 12:22 AM

Unknown said…
i am from india ,my father was born in bangladesh,both from my father and mother is from bangladesh

if every thing is to be blamed ,that is cult of joti basu or pranab mukherjee
this is two hizra ,done nothing, other than shallow cheap mean high cast (castism in hinduism) stereotype.
After working in GULF countries ,all malwaris support malwaries,punjubis support punjabis irresspective of hindu or muslim
we bengalis fellow can accept the fact the other person is also a bengali irrespective of religion and cast
after all bharat mata recives 100 billion dollar as remittance from muslim countries

this sterotype bengali so called pretending to be intellectual(BUDDIJIBI) has hidden castist agenda ,tries to mix with more hindi speaking
I AM HINDU BENGALI ,FUCK THIS BENGALI BUDHIJIBI