March 27, 2012
Islamists are on the rampage
History does change at each moment and every moment does bring forth a novel anecdote – Hindus of Bengal are witnessing the same at the moment – it’s an unrestrained growth of Islamic fundamentalism – hell-bent to unleash a complete hell on Hindus.
On March 25, 2012, at 9 am, while Hindus were engaged in setting up their new business hub, a few Islamists appeared on the scene. Claiming the land as theirs, they asked Hindus to desert the tract right away. When on earth Hindus (stunned) refused to do so, foul languages were used against them; Islamists did rampage soon.  The foremost intention was to uproot Hindus, end their enterprises in any way. The mob comprised almost 90 Islamists including Sheikh Motiar Mandal, Sirajul Mandal, Rubiul Islam, Abdullah Mandal, Selim Mandal, Khaliullah Mandal.
To Know More Please Read:
http://basirhatpost.blogspot.in/2012/03/hindus-in-basirhat-persecuted-gravely.html 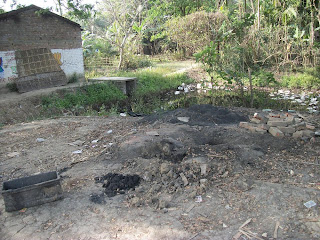