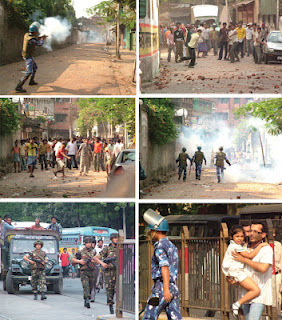 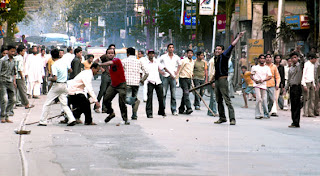 (Islamists protesting against The Statesman)
(Islamists offer funeral prayers for al Qaeda leader Osama bin Laden outside a mosque in Kolkata May 6, 2011)

ARYAN said…
It is a hypocratic act on the part of TMC government to close eyes and tolerate any act barbarism by the muslims. Taslima Nasrin is an author of world repute who has been also awarded the UN prize for promoting world tolerance but still there are protests against her in the muslim world. Its all because muslims don't have the guts to accept the sins they have committed. And holding prayers for Osama bin Laden in kolkata just shows how treacherous they are!
April 1, 2012 at 12:04 AM

knowing islam said…
unfoi think you should take help from hindus outside. please, be prepared for worse with out counting on politicians. they have to be kicked out of decision making.

knowing islam said…
Please do not expect any thing from these so called internet Hindus. Having drowned themselves in the concept all religions are same, they are feeling that if they be nice, every thing is going to be right.They do not know any thing about Islamic imperialism; this does not worry me.

What worries me is their complete indifference. They became such moral cowards.
April 2, 2012 at 1:13 AM

ARYAN said…
Bengali Hindus must retrace their path back to the days of glory and valor when we used to fight our battle ourselves. Nevertheless in this perspect we should vie for uniting all the Hindus residing in Bengal irrespective of their ethno-linguist culture. When the government has already deserted us and taken us for granted we should make ways for mutiny and struggle against islamic imperialism. We must realize that attack is the best form of defence. We should start making the islamists realize that we are an irresistible force and start teaching them lessons. We must start secretly boycotting hindu-muslim marriages, hoisting of pakistani flags in our land, entry of islam refugees, islamic disturbance to public life and etc.
April 4, 2012 at 6:24 AM

Inventor Sampan Chakraborty said…
Very simple-Kick all these scum dogs fucked up retarded sons back to their home or start killing them.In west too they are preparing for the same.