The numbers tell the story—or at least part of it.  After India’s Partition, Hindus were almost a third of the East Pakistan population, according to Pakistan’s 1951 census.  When East Pakistan became Bangladesh in 1971, they were under a fifth; 30 years later less than a tenth; and according to reliable estimates, less than eight percent today.  Throughout that time, there was a steady flow of reports on anti-Hindu atrocities there; atrocities that include religious desecration, land grabs, property destruction, beatings, forced conversion to Islam, child abduction, rape, and murder.

Bangladeshi governments not only refused to prosecute the perpetrators, but also maintained openly discriminatory laws.  One, the Vested Property Act, is an anti-Hindu law taken in whole cloth from Pakistan that allows the government to seize minority land and distribute it to Muslims.  It has been the economic engine that powers ethnic cleansing.  Another, the Eighth Amendment to the Constitution, declares Islam to be the state religion with numerous consequences that elevate Bangladeshi Muslims and denigrate all other citizens, especially Hindus. 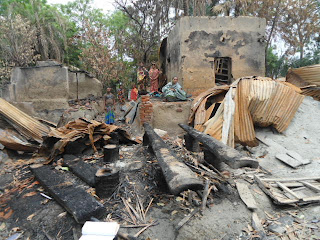