Will there be any justice to Hindus of Taranagar and Paschim Rupnagar villages?

How are Taranagar and Paschim Rupnagar villages at the moment? The question is not unfounded by any means; a detailed report on Hindu persecution in both these villages (Political reprisal victimizes Hindus in Joynagar only - http://hindusamhati.blogspot.in/2012/05/political-reprisal-victimizes-hindus-in.html) has already been published in this website but the fear psychosis, owing to Islamic onslaughts and matchless inefficiency of governance to nab Islamist culprits, continue to prevail the persecuted Hindu villages.

Following the murder of Shaukat Khan, at 7.30 am, on May 14, 2012, in the area of Ghoshalchowk, P.S. Joynagar, District: 24 Paraganas (South) and thus to have vengeance, Islamists made Hindus of both Taranagar and Paschim Rupnagar villages easy preys despite the veracity that Hindus were not involved with the slaying. The political feud likely to occur between CPIM and SUCI (Shukat claimed as SUCI supporter by local party leadership), hence, turned into a brazen Islamic endeavor against Hindus and police force deployed there watched the happenings barefacedly.

In accordance with reports, 43 houses have been despoiled, pulverized and also burnt down. However meticulous studies of Hindu Samhati do confirm that altogether 53 houses have been burnt down and also looted. The assailants were brainy enough; they were witnessed to burn granaries, kitchen and assail Hindu women (regarded as mainstay in any Hindu family) before anything to break Hindus down completely (both morally and physically). Two Hindu housewives, Ramola Haldar and Kabita Haldar (both name changed) were abducted before the presence of police, taken to Khanpara, Islamist area and having residence of slain Shaukat Khan. It is reported, both Hindu housewives were dragged to the roof of Shaukat’s residence, shackled, mercilessly beaten up and gang raped till they got unconscious. Both were recovered by police afterward but were not rendered any primary medical assistance even.

Owing to these grievous incidents, it is reported, 186 Hindus (young and old) from 56 families have fled from the villages thus far and painstaking investigation proves many Hindu houses there are remaining vacant at this moment in time.  Wretched Hindus in the aforementioned villages are maintaining a hand-to-mouth existence virtually with no assistances from local or higher echelons of administration. Even (each of) a few Hindu women, during investigation, were found to have a single saree –others being fired.  Hindu villagers, utterly ruined, have got to depend on others; community kitchen is being ruin in different houses in rotation.

Hasn’t there been any interference of Bengal administration, even if there has been no formal assistance to these hapless Hindu victims yet? Well, BDO (after lots of deliberations) has visited the persecuted villages (lip service in best sense of the term) but has not assured of any assistance ever. It is worthwhile to mention that BDO was supposed to visit the village within the next 2 days of happening but it got delayed bafflingly or to placate novel Islamist bosses of Bengal administration.

The viable assistance provided to them yet has been from Hindu Samhati and its president, Tapan Ghosh in particular. While HS has rendered financial help to the hapless Hindus to have rice and other indispensable materials to retain existence humanly, Hindu Samhati unit from Jiban Mandaler Hat (in close proximity) distributed clothes of about 10 thousand rupees on May 22, 2012. Tapan Ghosh, himself, got instrumental in distributing 30 saree and churidar to the victim women on May 23, 2012. However, the administration remains unresponsive to Hindu distress.

Whatever it is, there has been no end to agonies of Hindus; the greater part of both Taranagar and Paschim Rupnagar villages are vacant and none knows when Hindu (on the run) will come back to their homes and normality will resume in the villages once more.

Is this the only fate of Hindus in Bengal?

N.B. Hindu Samhati has conducted an extensive survey and prepared a list of households (gutted and/or looted), list of injured persons and also a list of assailants as told by the eyewitnesses. 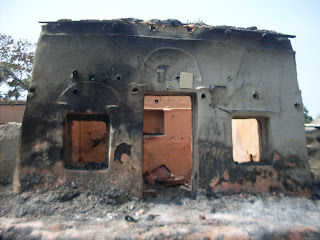 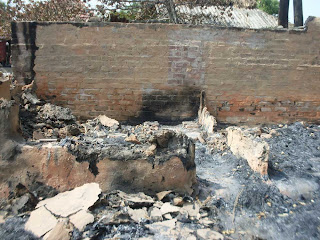 (Portion of a burnt Hindu property) 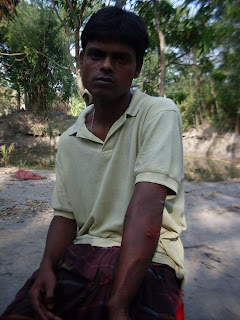 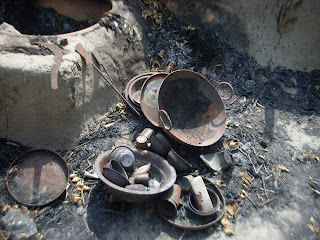 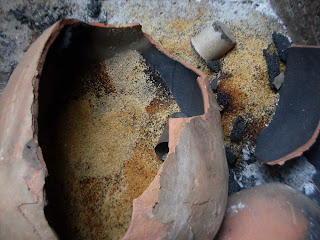 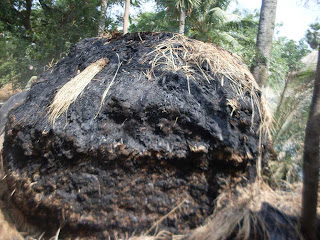 (Burnt granary in a Hindu dwelling) 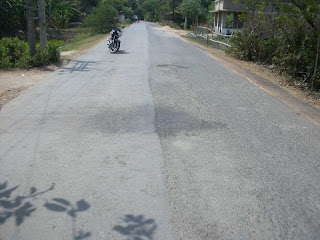 (Spot where Shaukat Khan was murdered)