December 14, 2012
Influence of Muslim Vote Bank and Cow Smuggling Money Make Hindus Helpless in This Border Town
On 11 December 2012, at around 07:30 PM IST, Koyel Roy (daughter of Late Sankar Roy) who is a student of class VII was returning from her private tuition. At Debgarh, she encountered with Shafikul Mollah, who is a cow seller (dalal) of Sundargarh, Shafikul was in a Maruti car along with his few friends and was completely drunk. They tried to drag Koyel inside the car. But Koyel, somehow, escaped from them and entered into a nearby house where a marriage ceremony was being taken placed.
Gradually, this news spread across the area and local Hindus assembled at that place. In the late night, while Shafikul was returning through that road, the boys stopped him and hit him, also ransacked his car. Later, mother of Koyel, Kakoli Devi Roy filed a written complaint to Bangaon police station. The Officer In-Charge of the police station, Jafar Alam assured them that the culprit would be arrested within 24 hours.
Next day i.e. on 12th Dec 2012, about 400 Hindus of the area led by Manas  Mahanta, the husband of Congress Councilor of 11 no. ward of Bangaon Municipality, assembled near Bangaon police station and demanded immediate arrest of the culprits. Hearing the news, Partha Haoladar, Ajit Adhikari and a few other Hindu Samhati members came there to inquire of the incident. The villagers submitted a memorandum to the police station. But as they witnessed the reluctant attitude of the police to nab the offenders, they went on to organize blockade of road at Bata More on Jessore Road.
A huge police force came to the place and requested them to withdraw the blockade. But the mob did not listen to their request. Subsequently, police started lathicharge mercilessly on the mob and the mob also started stone pelting towards the police. Some persons from both sides got injured. Police arrested 3 persons from the spot. Later in the late at night, at around 03:30 AM IST , police raided Debgarh and arrested 5 more persons from their houses including Partha Haoladar, Bangaon Block President of Hindu Samhati. It is to be noted that Partha Haoladar is an honorable businessman of the area and physically handicapped.
On 13th December, those 8 arrested persons were produced before the Bangaon court and police sought custody of 2 persons – Partha Haoladar and Manoj Pal. Other 6 persons were sent to Jail.
Manoj Pal is from Sundarpur village of Gopalnagar Police Station who took part in the protest against brutal murder of Dipankar Roy by the Muslim culprits on 5th Dec.
It is to be noted here that in the case of brutal and open day light murder of Dipankar Roy of Sundarpur village of Gopalnagar P.S. by the notorious Muslim criminals, police did not seek custody of the arrested 3 culprits. 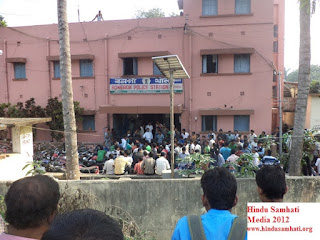 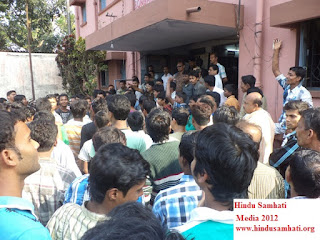 Hindus are feeling absolutely helpless and discriminated and they are thinking whether this border town Bangaon has already become a part of Islamic Bangladesh. 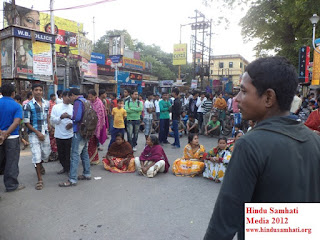