Outrage In Baruipur : Will The South 24 Parganas Administration Wake Up Before Its Too Late ?

December 19, 2012
Muslims forcibly occupying public land and attempt to build mosque opposite temple in Baruipur.Hindu outrage ignored by the Administration

Again the glaring appeasement of Muslims by the govt. of West Bengal has come to the fore, this time in the Sardarpara locality of Baruipur, S. 24 Parganas. Here, the Muslims of the wider area are trying to build a mosque, firstly on govt. land and secondly, right inside a Hindu locality and opposite a temple. Despite mass petitions of the local Hindus, the govt. has decided to keep its eyes closed. All for the sake of Muslim votes.

The administration’s abject surrender to all the misdeeds and illegal demands of the Muslims compels the Hindus to think that they cannot expect even a shred of justice from the govt. In consequence, Hindus will be compelled to think of migrating from this area of S. 24 Pargana district. Another Mograhat is in the offing, where Hindu percentage came down from 87 % to 47 % between 1981 and 2001. 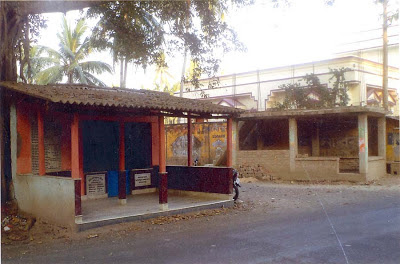 On the border of Ramnagar 1 and Ramnagar 2 Panchayats, at Sardarpara, there is a place called Shani Bat Tala as there is an age old Shani Temple. In front of that Shani Temple, there is a passenger shed which was built 25 years ago as bus stand on the Baruipur – Canning Road. Due to lack of any upkeep from the panchayat the passenger shelter fell into serious disrepair and became unusable. That is when the local Muslims of Kazipara slowly took control of that structure through a couple of years. Now the Muslims are trying to convert it as their namajghar (prayer room). But it was initially unsuccessful due to strong resistance from local Hindus. Recently, under the Prime Minister Gram Sadak Project, construction of a connecting road is underway in that area and Muslims took that opportunity to rebuild the construction. They built a ‘namaj-ghar’ in the ground floor and a club room at the first floor. Local Hindus vehemently objected to this because there is a temple where many devotees, including women, daily assemble for offering puja. There is a possibility of eve teasing from the club apart from other serious problems. Also the temple is located in Sardarpara, a Hindu locality just opposite the passenger shelter. While Kazipara, from where these Muslims are, is about one kilometer away from the location. Therefore it raises a justifiable suspicion why do these Muslims want to offer namaj one kilometer away from their own locality and just opposite a Hindu temple? 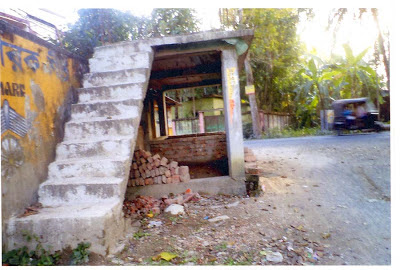 Just before Durga Puja, 2012, local Hindus submitted a mass petition to Baruipur police station, SDPO, BDO, BLRO, SDLRO and 2 panchayats. The petition also contained the grievances of Hindus against occupying of land belonging to nearby Niharika school by Muslims. The concerned authorities assured them that they would take due care of their concern.


Almost a week ago, Muslims organized two functions at neighbouring muslim majority localities of Hariraj and Chango where Muslims in and around the place came to show their strength. On Dec16th, 2012, despite the mass petition lying with the authorities, Muslims started rebuilding the structure. Apprehending a serious law & order problem, local Hindus reported the development at Baruipur police station. But to their surprise, they were told by police to report it to the panchayat office and refused to initiate any action. That being a Sunday, the panchayat office was closed. So, Hindus decided to visit a local political leader Priyajit Sen. On hearing their complain, Priyajit Sen called another TMC leader, Shyam Sundar Chakraborty (Kalu) over phone. But he too, washed his hands off the matter and asked them to report it to the head of the Panchayat Dilip Biswas. Hindus went moving from pillar to post without any resolution. So, when Dilip Biswas, once again, asked them to report the incident to a locally influential TMC Muslim leader Md. Kahar, their patience went out and they demanded an explanation that where Muslim leaders from both parties i.e. TMC and CPM are supervising the rebuilding of the illegal structure together, what justice can they expect?

However due to the huge gathering of Hindus and rising temperature of the popular mood, the Police arrived during midday and halted the construction work. The Muslims have threatened to continue the work again on next Sunday and Hindus are just left to live in that atmosphere without any active intervention from concerned government authorities. 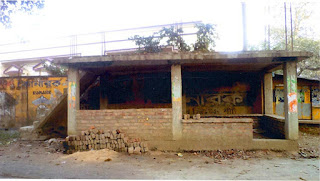 The identity and existence of Hindus are, once again, under stiff challenge at Ramnagar. Under active indulgence of the administration, Muslims are desperate in their design for muscling into Hindu localities and pushing the local Hindus out. This pattern has been evident in thousands upon thousands of incidents all over West Bengal. Police is totally ineffective towards illegal activities of the Muslim perpetrators either due to bribes or due to severe pressure from the upper reaches of the ruling party and govt., with strict instructions to ignore the depredations of the Muslim gangs. There have been many instances where the concerned Police officers have been transferred immediately, just because they took necessary steps as per the law of the land.

It appears that the administration is indifferent towards any plight of the Hindu population and is ready to appease the Muslims to any extent necessary. Even at the price of being a silent spectator or maybe a willing accomplice to a possible Hindu exodus from the area.

[Report compiled by Tapan Ghosh, President, Hindu Samhati.]
Hindu Samhati regularly monitors and reports violations against Hindus in West Bengal. We also work with both governmental and NGO agencies for proper education on protection and ensure remedies to the Hindu populace as per prevailing law of the land.