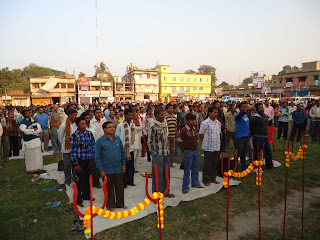 On 25th November, 2012, more than 1,500 Hindu activists and supporters converged in Thakurnagar (near Bongaon) in North 24 Parganas district of West Bengal to raise issues faced by them in the local area (as well as all of West Bengal).

2--Raising of Public Awareness of the Grand-Scale Stealing and Illegal Trafficking of cows (over 10,000 cows are trafficked illegally on a daily basis from the Bongaon border alone) by the Muslim business-goonda-clergy nexus, which include both Bangladeshi and local West Bengali Muslim elements, along with some corrupted government officials.

3--Discussion of How to Protect the Local Hindu Women From Being Attacked and Assaulted by Islamic Religo-Criminal gangs coming in from Bangladesh----how to effectively utilize the police, court system and civil rights groups to end this violation of honor.

Also, The Hindu Hriday Samrat, Balasaheb Thackeray was remembered for his immense contributions to the nation.

Hindu Samhati president, Tapan Ghosh, and two senior HS core committe members, Bikarna Nashkar and Ajit Adhikari were the main speakers at the event. The audience was energized with the presence of so many like-minded activists and supporters.

The informative pamphlet for the program can be accessed from the link below (Bengali): 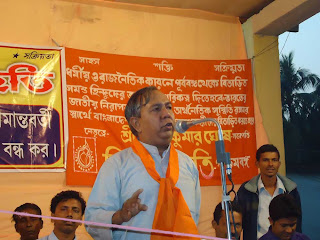