December 23, 2012
First I congratulate the youths of for demonstrating their iron will to protest against the heinous crime and expressing their distrust towards the system we have.

However, this expression of anger lacks articulation of the root cause. And this proves the absence of any established group in this spontaneous protest, further demonstrating disconnect between the people and parties. The govt. and the political parties are happy enough that these unorganized and inexperienced youths cannot pin point and focus the actual loop holes in our system which are always used by the political beasts.

The youths are screaming for justice, stringent law and first track trials in courts and death penalty for the culprits. But they are ignorant about the fact that if police does not even register the case, what is the use of stringent law and trials! Every time when an ordinary girl’s honour is breached, this massive agitation cannot take place. When that girl reaches a police station, who will ensure that she will be heard at all. A phone call would come to the concerned police officer from a political leader or a rich person, and police won’t even register the case. Then how one can expect that the laws and courts would be able to deliver justice to the hapless girl? So, the system has to be overhauled, especially the role of police and not just changing the laws. 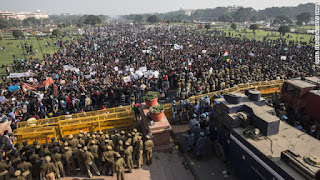 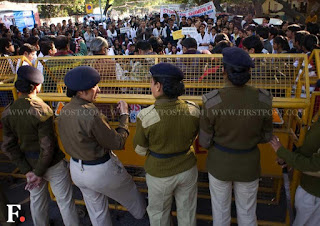 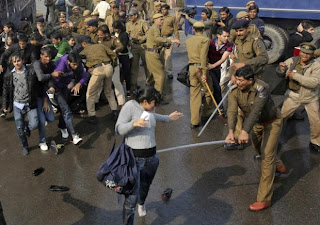 When an offender commits a crime such as rape, he does not do it with this thinking that the relevant law is soft or loose, and hence he would be able to come out from clutches of law. Rather, the culprit commits the offence with the hope that he will get away with the help of some influential person, mostly a politician, he is known to. Police and politicians need one another. So, the victim girl, if her acquaintances are not influential enough, is less likely to be heard in the police station. This decease cannot be cured by enacting any stringent law. It requires a massive change in the system to bring about fairness for all victims of violence and to delink the administrative and political systems by rooting out corruption and crime of the powerful and rich – many times protecting criminals.

The India Gate protesters are not focusing on this root cause. This basic fallacy and lacuna makes politicians feeling safe and extremely happy that despite this massive spontaneous protest nothing will change on ground.

BK Chowla, said…
This is a very good begining.It is spontaneous.
I am sure,this movement will throw up a leader
December 24, 2012 at 8:11 AM