This was the fundamental principle that stimulated millions of Hindus in the late 80s and early 90s to be a part of the historic Ram Janmabhoomi Liberation Movement leading to the demolition of Babri Masjid. 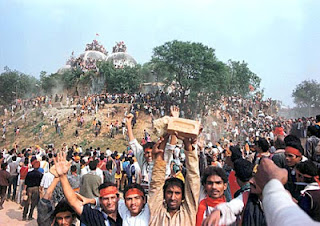 The demonic structure was built in 1528 by Mir Banki Khan, one of premier generals of Zahir-ud-din Muhammad Babur Beg or Babur, a foreign invader and founder of satanic Mughal dynasty in India, by destructing a pre-historic temple built to mark the birthplace of Sri Ramchandra.

How big was the movement that led to the revival of Hindu Nationalism in India? To be precise, neither the magnitude of great effort nor the vigor of Hindus, irrespective of racial, linguistic and geographical differences, who plunged into the historic struggle can be measured by any scale. Ram Janmabhoomi Movement, regarded as the most widespread mass struggle in the post-1947 period in India, attracted Hindus (undergoing Islamic persecution for more than a millennium) from each and every echelon of the society and this mass involvement created a HISTORY – impossible to be quashed by any notion, however vicious it is.

Establishment of Ram Janmabhoomi Temple, as part of a sordid reality, is yet to be established. The battle continues hence and even if two decades have passed by now after the historic demolition of unholy Babri Masjid, Hindus have the conviction that the dream to build a temple at the birthplace of Sri Ramchandra will be attained – whatever may be the cost of sacrifice.

The Historic Victory on December 6, 1992 continues to inspire Hindus and will do the same for ever and a day.
Hindu Samhati regularly monitors and reports violations against Hindus in West Bengal. We also work with both governmental and NGO agencies for proper education on protection and ensure remedies to the Hindu populace as per prevailing law of the land.