December 09, 2012
Whatever might be steady defects of Bengal governance in the past, it was vital at least – a saga that is becoming rarer now with each day it passes. And the present situation is so pathetic that even a petty Muslim cow smuggler can threaten the administration! 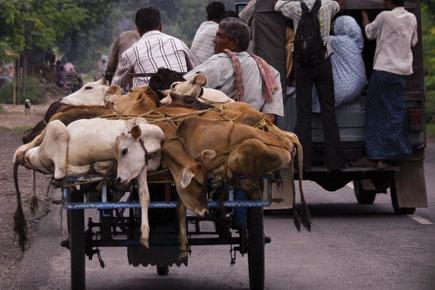 Following the death of four Muslim cow smugglers at Bangaon-Chakdaha road in Sialdanga area, P.S. Gopalnagar, Distirct: 24 Paraganas (South) on November 24, 2012, the whole area with its vicinity entered into the caldron of fire where Muslim cow smugglers blocked roads and railways paralyzing the administration virtually for hours.

When police went to negotiate (and if necessary to dismantle it) with the local bosses of Islamists, there was a large outcry for vengeance.  Even some of them were heard to scream that the business of cow smuggling was going on in full cognizance of police and as they had to pay government officials hefty amounts regularly, death of their co-religionists was unacceptable to them.

What’s more, a few Muslim cow smugglers told police officials that the any such death in future would lead to massive destructions only.