Durga Puja, regarded as mainstay of Bengali Hindus across the globe, contrary to the general belief that it was started by Raja Krishna Chandra Roy of Nadia to celebrate British victory over Muslim force in the Battle of Plassey – 1757, was initiated in the mediaeval era to unify the then fragmented Hindu forces in Bengal against the Islamic tyranny including brutal Hindu persecution. And the person who did all these was none other than Raja Kangsha Narayan, undisputed supreme lord in Taherpur, District: Rajshahi. He is also known as Ballal Sen No. 2 for his astuteness, generosity and leadership to Hindus in history.

What would be the best answer if there is any question of its necessity then? If the history is explored properly it will be found that those were the darkest days in ; kingdom under the auspices of its Islamic bosses was always ready to hound Hindus. And growingly persecution of Hindus under any pretext became a norm.

It was the rule of Hussein Shah and following the unfortunate downfall of Raja Ganesh, Hindus accepted the Islamic suzerainty. Moreover, the collapse of Kamtapur or last nail in the coffin made Muslims more joyous and Hindus more dejected. Only an apposite program of religious awareness (Dharma Jagaran) could be the best way to make Hindus virile once more. The role of Krittibas Ojha must be commemorated with veneration in this respect. The most momentous contribution of his to Bengali literature and culture has been the Bengali translation of Ramayana, one of the greatest Hindu epics. He is also responsible to render the notion of Akal Bodohon to the Bengali Hindu society.

Prior to the appearance of this theory, Durga Puja was celebrated in the month of Chaitra, first month in the national civil calendar of , and it was known as Basanti Puja. But the historical endeavor of Raja Kangsha Narayan, conforming to the theory of Akal Bodhon, as propounded by Krittibas Ojha, led to the beginning of Durga Puja in the month of Sarat or Autumn. Akal Bodhon denotes the worship of Devi Durga by Sri Ram Chandra before the victory over and killing of Ravana, the demon king.

All these affirm that Durga Puja is related more to valor and power, essential to overpower and annihilate any form of injustice. This basic thought got more popular during the anti-British independence movement, especially among the revolutionaries in .

There can’t be any second or alternative thought to this and even if there is development of any such, it must be stamped out without delay. 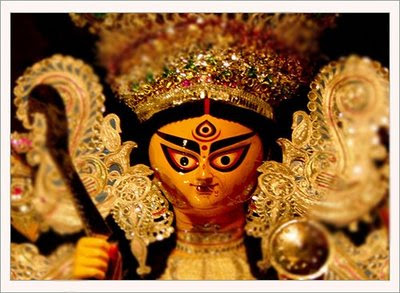