Who’s next target? Your wife or sister or mother?

Myriad reports published in this news site have already depicted how hapless the condition of Hindu womenfolk in the Indian state of Bengal is getting in the wake of mounting onslaughts and sexual attacks of Muslim fundamentalists but the gang rape of Papiya (name changed), daughter of Jibon Santra (name changed), village: Raghunathpur, P.S. Mandirbazar, District: 24 Paraganas (South), on November 16, 2011, sufficient to shame wild beasts even, surpasses all these. Papiya happens to be an innocent Hindu girl of 17 years and on the fateful day, she went to a small pond in the field, behind her house, to fetch some fishes for the lunch. She was seized there by 4 Muslim hooligans and was gang raped. An FIR was lodged by the wretched Hindu family but now, it is proved that both the FIR and Medical Report have been twisted leading to an intense dissension among Hindus in the environs.

The outrageous incident of ravishment of Papiya, as already stated, took place at 2 pm on November 16, 2011, when she was in the field to have some fishes for the lunch. It is to be noted that the impoverished family hardly have the capacity to have fishes in lunch on a regular basis. So to have the merriment she went to the field but little did she know that the same desire for merriment would turn into her worst misery. She was grabbed by 4 Muslim youths, overcome easily and was raped one by one till she had consciousness.

Since Papiya did not return within the scheduled time, her family members started to search her and finally at 3.30 pm she was found wounded, in an unconscious state and scantily dressed. The aghast family took injured and comatose Papiya to the residence and afterwards she was admitted to . Witnessing her sinking condition, the hospital took no chance, referred her to where she was admitted in a short while.

Meanwhile, the situation in the and its neighborhood, owing to the ravishment of Papiya by Muslim goons and indifference to it by the administration, started to get more defiant; Hindus became adamant extremely and out of rage blocked the thoroughfare lying before the village again and again. The situation was alarming; Muslim, from neighborhood villages, witnessed the same but did not react. All these went on throughout the following days of November 17 and 18.

The circumstances just swinged with the Muslims entering the scenario in numbers. As per Hindus, Muslims, feeling the state of affairs turning against them fast, thought it wise to jump into action. Not only the rail track and road was blocked by them (on November 19) to protest against Hindu acts on previous days but a series of bombs was also hurled on Raghunathpur. Hindus, instead of getting afraid and running back and forth, started defending themselves valiantly and jumped Islamic criminals. The violent skirmish ended with the timely interference of RAF and police force from P.S. Mandirbazar but strikingly, police force was found to harass and persecute Hindus only saving Muslims.

Along with 2 Muslims, 6 Hindus have also been arrested to retain law and order with communal harmony (!!!). They happen to be Pijus Mandal, Anup Naskar, Tapan Haldar, Bidyut Haldar, Sukanta Chatterjee, Animesh Haldar. It has been learnt that all of them have been taken to Diamond Harbour P.S. While Pijus hail from the of , others are from the . (As fresh reports are coming in, all 6 Hindus have been bailed out).

When this scribe went to the village in person (Mandirbazar on November 19, 2011) to investigate the reality, the same violent situation and seething attitude of the Hindu populace was perceived.

Here is a note on the following yet spectacular developments. Local Muslim leadership left no stone unturned to turn the incident into its favor and their nefarious network was seen to spread a single message across the neighborhood – what happened was a result of consent of the girl, slovenly woman or slut in every sense of the term. Astonishingly the same version was uttered by local political leaders and police personnel too, authenticating the constant need and importance of a set Muslim vote bank. It was witnessed by this scribe too during talking in P.S. Mandirbazar on November 19, 2011.

It is worthwhile to mention that RAF was stationed at Raghunathpur in the morning on November 19, 2011, but was withdrawn, due to weird reasons, in the evening leading to the beginning of a fresh violence by Muslims. Bombs, in large numbers, were thrust to Hindu villages once again inviting stringent police action once more. But this time too the prime targets of police were Hindu households and people. All these made Hindus resolute and an incomparable unity among them was perceived.

Hindus, at once, decided not to participate in any meeting henceforth and the same mood came to light when the peace meeting, happening on November 20, 2011 during evening, took place comprising bountiful Muslims, large police contingent, CM Jatua, MP – Mathurapur, Joydeb Haldar, MLA – Mandirbazar along with local political leadership but with no Hindu. Here is the unanimous decision of Hindus – not to compromise and continue the struggle till the culprits are nabbed and justice is attained.

Lastly, both the FIR (No. 202 dtd. 16/11/11) and Medical Report have been twisted. The Medical Report affirms that Papiya is a psychic patient with no external or internal injury and hence, her family has been advised to consult a psychiatrist. Family members of Papiya’s family confirm that this was not the original FIR submitted by them.

Papiya, in spite of being weak and sick extremely, has been discharged from Sub Divisional forcefully and all these prove political pressure has played a major role in distorting the Medical Report with the FIR. Incidentally, in the beginning, the concerned doctor said that he would refer Papiya to , Kolkata but the Medical Report proves otherwise. The doctor has become an easy prey to the heinous political pressure and has done a gross injustice to a hapless and innocent girl of the Hindu society.

What will happen to her? 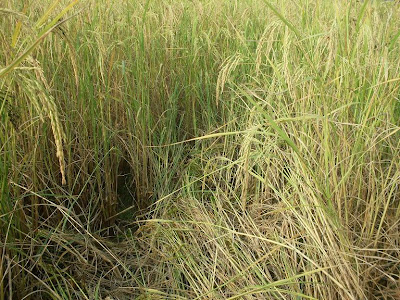 (Spot where Papiya was gangraped) 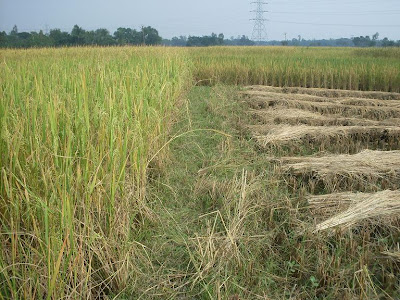 (Way through which Papiya was dragged by Muslim crooks) 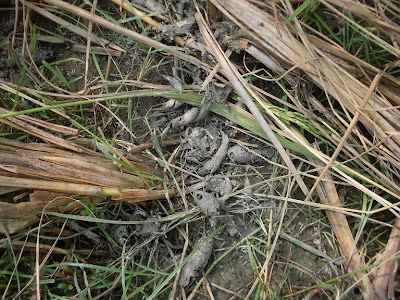 (Fishes caught by Papiya lying in the field still)

Dr. Richard Benkin said…
I am posting this incident on my web site and on my Facebook page. I also address this issue of West Bengal in my forthcoming book: A QUIET CASE OF ETHNIC CLEANSING: THE MURDER OF BANGLADESH'S HINDUS; to be published in January by Akshaya Prakasahan of New Delhi.