District of Howrah in Bengal is one of the greatest havens of Muslim rowdies and crooks – this is not any new info but surely how predominant Muslim areas there are engulfing neighboring pocket-size Hindu areas (slowly but steadily) is a new issue that must be dealt with much gravity. This significance derives its strength from the one and only apprehension – complete absorption leads to cessation of Hindu identity in the same area and its environs once and for all – deepest crisis being faced by Hindus in Kamdevpur, Sankrail (South), P.S. Sankrail, District: Howrah.

The Hindu village, encircled by antipathetic Muslim villages, is getting more and more vulnerable and two successive Islamic assaults have scared it on the whole. While one of them is the assault on Hindu houses on Muharram (December 06, 2011) by Muslims moving forward with the Taziya, the second is the destruction of Shitalatala temple (on December 08, 2011) in the village by Muslim rowdies, known for their rampage in the neighborhood.

It has been learnt that on the day of Muharram an Islamic procession (armed also) with Tazia, led by infamous Muslim rowdies like Asgar Sheikh, Aftar Khan, Jamir Sheikh, Rabial Khan, was passing by (at 7.30 pm) the houses of Bhuto Malik and Boku Malik (both Hindus) and intentionally destroyed hay-made fence of Bhuto and cowshed of Boku. An FIR has been filed against aforementioned persons and their accomplices at the local police station.

The second case – the more dreadful one, happened on December 08, 2011 when villagers, in the early morning, found that the indigenous Shitalatala temple had been destructed. In accordance with villagers, the demolition took place between 2-3 am at night. FIR, in this regard, has also been lodged.

Now here is a question. Why is Hindu-Muslim relation in the village at an all-time low? A meticulous investigation has brought to the fore some cruel yet highly imperative facts. It has been learnt that Muslims, in spite of enjoying their predominant position for years, started to pass by Hindu area with Tazia on every Muharram day only three years ago and it was to teach Hindus a lesson. What are the faults of Hindus? Hindus in the village, on every year, celebrate Kali Puja and make a grand procession (with official permission) to immerse the Holy Deity. The procession, by coincidence, goes past the local Singhamara Masjid and this irks Muslims and also provokes them to teach Hindus a lesson.

Destruction of the temple is a new beginning, done by Muslim cronies to test nerves of Hindus. There may be innovation in next approaches, depending on the ongoing experiment.

Police is patrolling the village of Kamdevpur at this point in time. What will happen to Hindus once the police force is withdrawn? 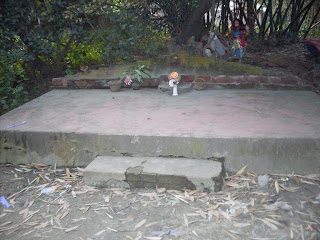 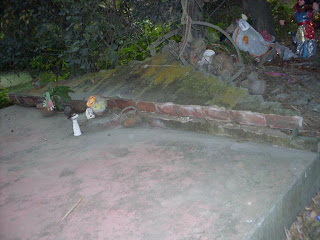 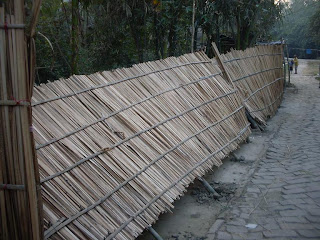