Since Long In Mograhat, Selim And Nurul Are Government.

Both Are Still At Large.

People Think They Are In Safe Shelter Of Some Politicians (blessed by) or The Other.

Both Politicians And Police Are Financial Beneficiaries.

Police Thinks That It Is Futile To Arrest Muslim Culprits For Obvious Reasons.

Politicians Think, These Muslim Culprits Will Fetch Them Both Money And Vote.

Moreover, These M – Criminals Will Supply Them The Much Needed Muscle Power To Silence The Opposition. This Technology Was Mastered By The Leftist Parties the art borrowed from their foreign counterparts, Not Only CPIM, But Also Forward Block, RSP, SUCI, etc.

Therefore, Shed Some Crocodile’s Tear After Any Major Mishap, Let The People Shout For Sometime. Everything Will Be Okay In Due Course.

In This Horrible Mograhat Case, Mamata Banerjee Opened The Treasury Of State Govt., As If It Is Her Own Money And As If, The Dead Persons Are Martyrs For Some Great Cause. Every Victim Will Get 2 Lakh Rupees Hard Earned By You And I as compensation for their fun though, they claim, consumption of liquor is against Shariyat law.

People Are Compelled To Think That This Large Heartedness Only Because Almost All The Victims Are Muslims.

She Does Not Think What A Dreadful Bad Precedence She Has Set For Future References.

If This Is Not Muslim Appeasement, Then What Else?

This Naked Muslim Appeasement Will Take Our West Bengal To Which Disaster? 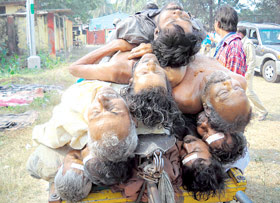 hellboy666135 said…
thats true, muslim vote bank gets compensation, but the victims of AMRI, majority hindus are deprived of the compensation from the state goverment.
December 24, 2011 at 8:28 PM