Hindus – stepchild of Secularism in India

April 19, 2012
Is the chronicle of secularism doctored in the realm of India?  This single issue has been confounding Indians, in particular Hindus, through decades and truly, the dispute refuses to end as with each day it passes, the same is getting more baffling. And the role of political parties in India, regardless of their (alleged) ideological inclinations, has been no less in fuddling the issue.
Secularism, to cut a log story short, as per western tradition, happens to be a doctrine that does decline religion along with religious considerations or does portray an institution where biasness  to any particular religion finds no place in administration. Moreover, the Secular State, on the whole, doesn’t have the right to mistreat or placate any individual or community on the basis of personal religion.
Are all these perceived in India? I am eagerly waiting for a favorable answer even if this prospect is as bleak as the sun rays in a cloudy day!
To Know More Please Read:
http://ganashakti.blogspot.in/2012/04/hindus-stepchild-of-secularism-in-india.html 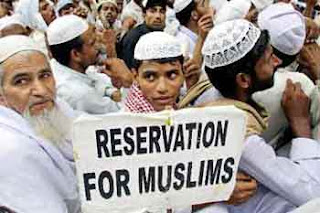 ARYAN said…
Its very true that inspite of so many ill treatments meted out to Hindus many of our fellow Hindus are dumb stuck probably because they believe ignorance is bliss........I don't know when and where it became a trend for the Hindu youths to denounce their own religion in the name of tolerance. Secularism is the biggest joke in our constitution because inspite of all odds India still stands to be a 81% majority population of Hindus.
April 20, 2012 at 5:12 AM