April 05, 2012
Tricks are good till they remain incomprehensible……
Just in two days Kolkata remained witness to two rare happenings! While on April 3 a special Imam-package (announced by Bengal CM herself) was witnessed to woo Muslims to make Trinamool Congress victorious in the coming Panchayat election, the next day was marked by the visit of Mamata to Belur Math masquerading as a mere well-wisher to various activities of Ramkrishna Mission. Is it in reality or whether it’s a part of damage control to sustain a devoted Hindu vote bank as well? Skepticism is rising as this happens to be a novel saga in the political culture of post-1947 , unparalleled to any of her preceding Chief Ministers, thus far. Does Bengal CM consider endorsing Ramkrishna Mission can ensure her a steadfast vote bank among Hindus? That’s a million dollar question at the moment!
The first endowment of Mamta Didi to Ramkrishna Mission is a solemn pledge – the State government of Bengal (in spite of being cash-strapped) will render an amount of Rs. 1 crore to renovate the quondam Barahnagar Math of the . Indeed, it’s fine even if the original demand of the was Rs. 8 crore. Other benefactions were also perceived. Apart from meeting Swami Atmasthananda ji, president of Ramkrishna Mission and Math, Didi expressed her best wishes to the entire organization by stating that she would take care of the lofty promises made by her (in the capacity of Union Railway Minister) earlier. These include construction of railway track from Belur Math to Belur railway station, multi-functional complex, a structured medical institution. Mamata assured that steps to better surrounding environment of Belur Math would also be adopted before long. She has some major plans as regards the home of Swami Vivekananda too!
For sure the meeting between her and Swami Atmasthananda ji was nice. But the issue does not end here. Did any Sannyasi of the Mission ask the CM of the fast deteriorating law and order situation in Bengal? Why are Hindus being victimized specifically?  Why are Islamists given free rein to carry out religious persecutions on Hindus? What makes her remain silent regarding the drastic demographic changes (in full swing) at the moment? Was she asked of her thoughts to better Hindus in general?  The answer is a Big NO.
Ramkrishna Mission does not deal with these; it is devoted to the cause of spiritualism that does fail to give persecuted Hindus a solace at any time – whether it’s in the days of bloody partition – nemesis of Islamic persecution on hapless Hindus or these days when Hindus, especially in Bengal, are on the verge of extinction.
Last but not least, how far does Ramkrishna Mission represent Hindus? Is it a Hindu mission outright or a pack of Ramkrishnaites? This issue must be sorted out before anything else. For that reason, Mamta’s smart dreams to win Hindu hearts thus have got to be shelved. There is no other alternative.
If CM considers benefaction to Ramkrishna Mission authorizes her pro-minority postures, she remains in a world of self-deception. Venerable sages of are not unconscious of fast developments in ; myriad instances prove how their temples are also being attacked and they try to find refuge from Hindu activists.
Isn’t silence (on their part) synonymous to a misdeed in this case? 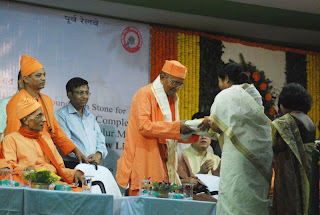 ARYAN said…
Probably the members of Ramakrishna mission have forgot that they are meant to uplift the Hindu religion and not neglect it. Swami Vivekananda is the one who gave Hinduism an international recognition, but looks like the sanyasis or swamijis of R.K. mission are engrossed in their life of ascetism without any service to the society and consider that ignorance is bliss.
April 7, 2012 at 10:34 AM

Unknown said…
@aryan how did you came to know that rkm is doing nothing?truth is that we connive the fact that only ramkrishna mission does service for our society culture and for rejuvenating youth.they dont want recognition like ramdevs and all those morons..whenever there is a natural disaster in bengal or india,whether the govt does go or not,rkm always there for the relief and rescue operation..i am well connected,thats why i am obstinate with my view
June 20, 2012 at 3:14 PM

Unknown said…
Aryan , How did you say that RK Mission do nothing to society. Please be very much aware about a fact before writing a review. And it is a great point that RK mission is not a Hindu Organisation. Sw. Vivekananda enriched and rescued the wrong Hinduism and established Vedantism. RK Mission is a Vetantic Organization which is beyond any cast , and this is a great thing. Many Muslims enriches the activities of RK Mission. They are also devotees of Ramakrishna. They worship him. In the previous review , the unknown person said very right. I think you are a old faithful wrong Hindu. Hinduism is based on Vedanta, not on the speeches of old minded spiritual Gurus.RK Mission is the leading Organization for service to society and service to mankind.
July 21, 2013 at 1:37 AM