July 25, 2012
Can the ongoing wave of violence in Assam be controlled? Even if the administration is wavering still and trying to use every opportunity to quash the turbulence, CPIM has fullest confidence on the Centre and has urged it to restrain violence in Kokrajhar and adjacent region in lower Assam. It is to be noted that affected people there are moving to north Bengal districts in strength.

He has asked the state government of Assam to position police and para-military forces on the Bengal-Assam border without more ado and has also appealed to right-thinking people in Bengal-Assam border to play effective roles to curtail recurrent fratricidal (?) clashes.

Even if Biman Babu’s good wishes, in this case in particular, can be read easily it is apparent to Hindus that the entire motive behind the formal statement is to save Islamists from Bangladesh, entering Assam with the single intention to make the Mughalistan or Greater Bangladesh project a success. And this happens to be pangs of the Bengal-based Left Front Chairman.

If he is so humanitarian, why did we miss a similar form of statement during Deganga, 2010 when Hindus there encountered a pogrom altogether and the Left Front was still at the helm of affairs? Why has the Left Front maintained a weird silence regarding recurring and also mounting Hindu persecution in Bangladesh down the ages? What was Biman Babu’s reaction regarding Hindu genocide in Bangladesh, 2003?

There was not an iota since the pious and orthodox Marxists (?) do not dare to injure Islamists so as to maintain a strong and steady vote bank. The same was the attitude of first-generation communists and it had got evident when the undivided CPI supported the Pakistan demand and even held a public meeting for it in 1945 in Kolkata (then Calcutta).

Even during the Barishal genocide in 1950, when Left dignitaries including Soumen Tagore (RCPI) and Tridib Chowdhury (RSP) shared dais with Dr. Shyamaprasad Mukherjee to protest against the gruesome episode in then East Pakistan (now Bangladesh), CPI leaders preferred to remain silent.

And this does happen at every time. If revered Biman Babu is asked the reasons behind the demographic invasion of Bangladeshi Islamists into Bengal during the 34-year old Left regime what will be his answer? Isn’t he aware how the steady influx (illegal immigration on the whole) of Muslims from Bangladesh has changed the demography of Bengal permanently? But it was indeed a pious job! After all it helped CPIM to retain its sway in Bengal for decades.

What CPIM fails to comprehend is that the time has changed and Hindus have become aware of their ominous intensions. And this happens to be the foremost reason for Hindus to discard them in the last assembly election. CPIM-led Left Front didn’t lose for insolence of Muslims but due to the lack empathy of Hindus to them.

Nevertheless the Leftist saga continues – to do everything to better Islamists. If the same events (now in Assam) take place tomorrow in Bengal they will not have the least refuge for themselves – this can be said without doubt.

Hindu restraint has a limit and they can’t be taken for granted always – it’s the writing on the wall. The earlier foes of Hindus learn it the better it is for them. 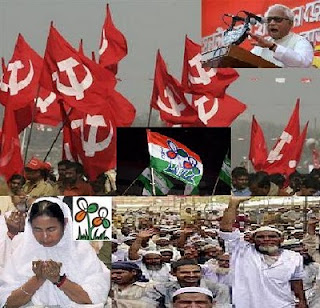