NO to Love Jihad

It’s not the end but the beginning of a new episode of countermove and whether it’s Karimgunj in Assam or Bengal – wherever there is any Hindu defiance it creates havoc for all, whether they’re in corridors of power or Islamists. What happened to Congress MLA Rumi Nath and her second husband Jakie Zakir a few days back in Assam was not anything abrupt but the culmination of days of anger and the need for retribution among Hindus.

Love Jihad, blatant appeasements of Islamists by all parties (cutting across political lines) to retain power and expend money of all tax payers for developing them (merely) have left Hindus fuming. The reckless onslaught on Rumi Nath, representing Borkhola constituency in Cachar, last Friday was a diminutive representation of the same standpoint. And it’s going to rise with the passing of each day – this can be said without a shred of doubt.

It has come to knowledge, on May 22, 2012, Rakesh Singh, first and Hindu husband of Rumi Nath lodged an FIR saying that his wife was kidnapped – she had gone missing on the previous day. However, her surfacing on June 02, 2012 and assertion how she converted herself into Islam and married Jakie Zakir and of her gratifying honeymoon to Agartala created strong discontent in the vicinity making even her conventional supporters, all Hindus, irate over her.

What is more, soon after broadcast of her second marriage, finest evidence of debauchery and also Love Jihad, lots of her supporters and social organizations in the Barak Valley, containing Karimganj, Cachar and Hailakandi districts, had warned her not to enter the area. On Friday, she decided to visit Cachar district to look over some flood-affected areas and she was hissed by protesters (turned into detractors) almost everywhere.

And what happened next on June 29, 2012 was beyond the belief of anyone. In accordance with Pradip Pujari, Superintendent of Police – District: Karimganj, a mob of no less than 400 gathered before Hotel Nakshatra in Karimganj town (MLA along with her Muslim husband had checked in last evening), shouted slogans against her, finally entered their room and thrashed the fresh couple brutally. Even if the couple tried take refuge in the toilet, it turned into a flop story altogether.

The incident has led to lots of uproars both in the state and national media and even street battles, thanks to the entrance of several Islamist organizations like Ahl-e-Sunnat in the picture, have taken place between Hindus and Islamists.

But to the dismay of all, especially secularists, Hindus are in no mood to withdraw or leave the battlefield. Reason? Hindus are stating Enough is Enough. Reliance on administration to solve out such cases is synonymous to stupidity and Hindus can’t remain nice, humane, law-abiding pudding heads any longer. 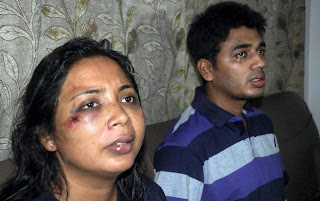 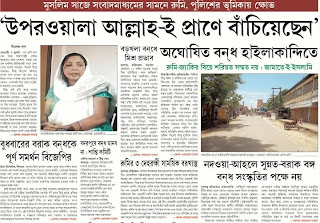