January 12, 2013
Then and then alone you are a Hindu when the very name sends through you a galvanic shock of strength.

Then and then alone you are a Hindu when everyman who bears the name, from any country, speaking our language or any other language, becomes at once the nearest and the dearest to you.

Then and then alone you are a Hindu when the distress of anyone bearing that name comes to your heart and makes you feel as if your own son were in distress.

Thus spoke a person whose appearance, presence and works not only galvanized Hindus but helped them to come out of a thousand-year old slumber under the sway of Islamic and British imperialisms – he is none other than Swami Vivekananda.

Swami Vivekananda, in brief, appeared at a time when Bengal Renaissance was in its full might, nurturing every young and subtle Hindu youth but definitely the consciousness or pride of being a Hindu happened to be the first and foremost casualty.

What would have been destiny of Swamiji then? Sri Narendranath Dutta (previous/Garhasthya name of Swamiji) perhaps would have ended his life as an undirected, radical and intelligent youth had the chance meeting between him and Sri Sri Ramkrishna Paramhansa not taken place in November, 1881.

The meeting became both a turning point in his life and made him realize the millennium-old anguishes of Hindus that inspired him to search for new ways – ended with his gallant deeds to unfurl the flag of Hinduism for the eternity.

On the word of K M Pannikar, renowned historian and diplomat, “This new Shankaracharya may well be claimed to be a unifier of Hindu ideology.”

And if one is asked to write something on Swami Vivekananda’s contributions to Hindus, words will fail to do the same. To begin with, Swamiji was wholly instrumental to render Hinduism a precise identity (for the first time in its history). Prior to his appearance, Hinduism was nothing except a slack confederation of an assortment of sects. He was the first religious leader to recount basics of Hinduism with common ground of all sects. As said by Sister Nivedita, “… it may be said that when he began to speak it was of ‘the religious ideas of the Hindus’, but when he ended, Hinduism had been created.”

Swamiji also acted as the pioneer in defending Hinduism, to protest whenever Dharma was censured. He made Hindus realize the heinousness of Islamic vandalism and Christian Evangelism and how both had been sucking Hindus’ blood for centuries to make their dogmas triumphant.

Last but not least, Swami Vivekananda was an ardent patriot to whom freedom of Hindus from shackles of British Imperialism happened to be the first step to reach the stage of ideal manhood or Hindu. It was he who stimulated Hindu youths to adopt the path of armed revolution.

Where are Hindus in his 150 th anniversary then? Hindus are simply nowhere; Hindu identity is bankrupt and is used as a ploy to betray them only. Hindus have no nation across the globe; they can’t even bite when their Dharma is admonished, let alone avenging ongoing persecutions.

We have to become real Hindus; it can be done only if we follow his ideals religiously along with the Vedic principle – Idam Shastram Idam Shaastram; Shapadapi Sharadapi (Power of Knowledge is equal to Knowledge of Power). 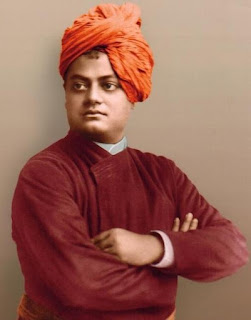