Call of Hindu Samhati’s 6 th Anniversary – Courage, Strength and Action can save Hindus only 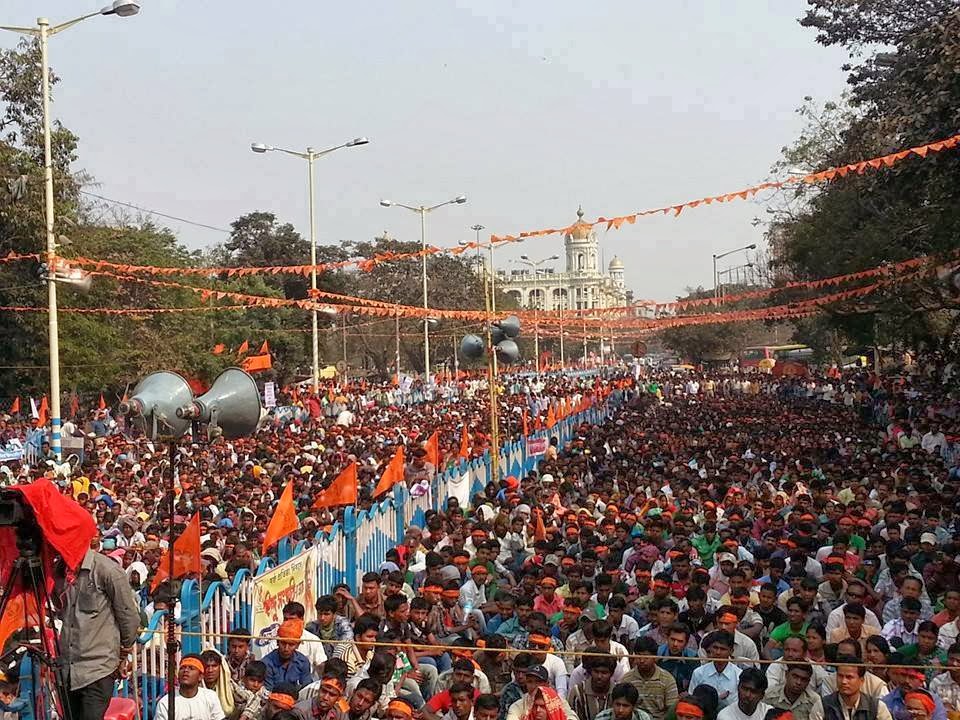 Strength and Stamina to Struggle begets Success –finest portrayal of this globally acclaimed gospel got apparent in the 6 th anniversary of Hindu Samhati in Rani Rashmani Avenue at Esplanade/Dharmatala, Kolkata on February 14, 2014 before the presence of more than tens of thousands of its supporters and millions of speculative bystanders across the globe. It is needless to say, no stone is left unturned every year to halt the anniversary of Hindu Samhati; similar endeavors had surfaced in this year too but the escalating endurance of Hindu struggle overpowered its foes, both in administrative and political arenas, ultimately. What happened on the day was nothing except a Festival of the Masses before the presence of stalwarts of Hindu struggle across India. People who graced the occasion included Tapan Ghosh (President, Hindu Samhati); Bikarna Naskar (vice-president, Hindu Samhati); Suresh Chavanke (Chairman, Sudarshan News Channel); Suryakant Kelkar (National Convenor, Bharat Raksha Manch); Swami Tejasanandaji Maharaj (Bholagiri Ashram, Haridwar). 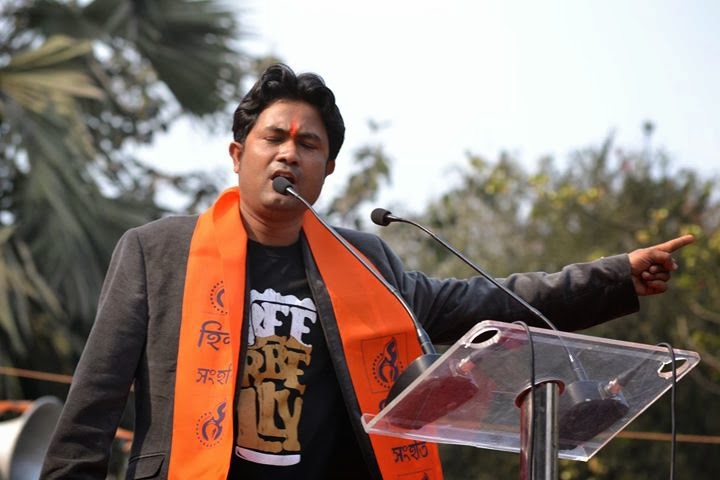 The mass meeting was inaugurated formally by patriotic songs and tribal dances, exemplifying the rich tribal culture of Bengal, remaining sanctified despite challenges through centuries. Speaking to the jam-packed avenue Shri Ajit Adhikary, one of Hindu Samhati’s valiant warriors fighting desperately against challenges of Islamic atrocities in the tumultuous area of Bangaon and its environs in the district of North 24 Paraganas, recounted escalating cruelties on Hindus there by radical Muslims from Bangladesh, abetted by local Muslim population with the administration.  He stated with conviction that no matter atrocities of Islamists, Hindus there have already learnt to struggle and overpower their arch-rivals and even if it calls for bloodshed, Hindus are ready to sacrifice. 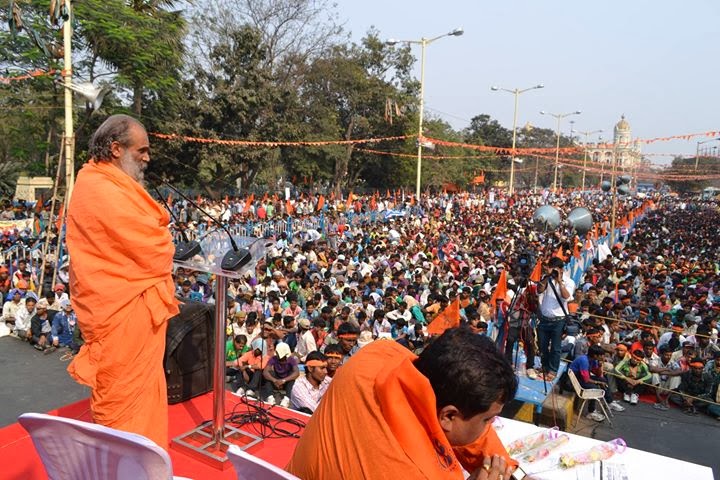 Swami Tejasanandaji Maharaj, in his brief speech, emphasized the need to wage struggles against forces hell-bent to crush the Dharma and through explicating Shlokas stated that Sanatan Dharma accentuates the need to have a valiant life and never abhors the path of violence, if it remains the sole option to save humanity. Shri Suryakant Kelkar stated distinctly that Hindutva is synonymous to Bharatiatva; India, ever since its existence, has always been a Hindu Rashtra and the time has come for Hindus to speak and act together against the saga of minority appeasement in the name of secularism. 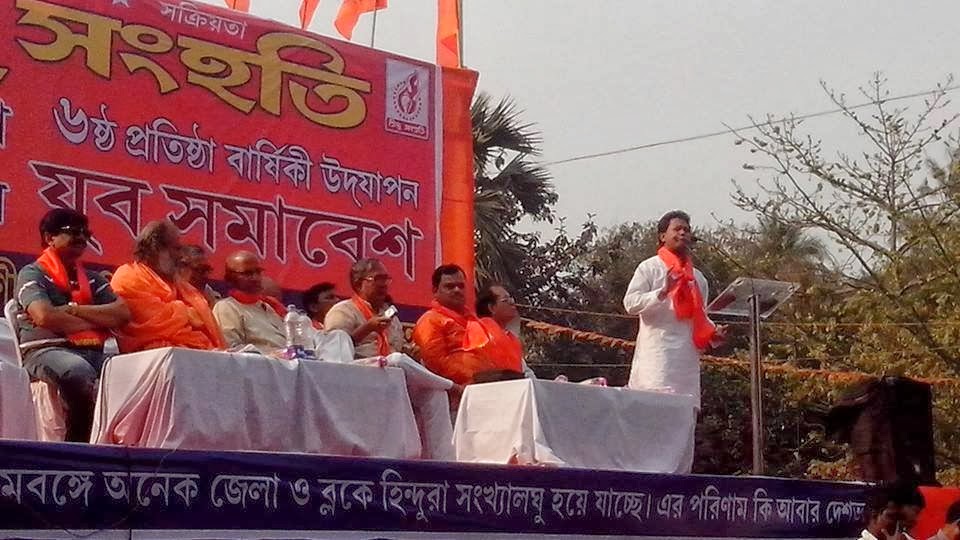 Shri Bikarna Naskar commenced his speech by asking the gathering whether the shibboleth of Vandemataram is crime. Vandemataram was the word that inspired millions of people to sacrifice themselves to liberate motherland from shackles of British imperialism but the same rallying cry, these days, is being denounced as paradigm of Hindu fundamentalism. He stated vigorously that he would always abide by this battle cry and would love to be branded as a Hindu communal. He also censured the reigning political as well as the administrative scenario severely posing while felonious acts of radical Muslims are being shrouded to have Muslim votes in elections, Hindus are being swindled in every capacity and they are not being allowed to complain against Muslim criminals in police stations. Existence of Hindus, by now, is at stake hence, and only a vigorous struggle can help Hindus to overcome these heinous onslaughts. 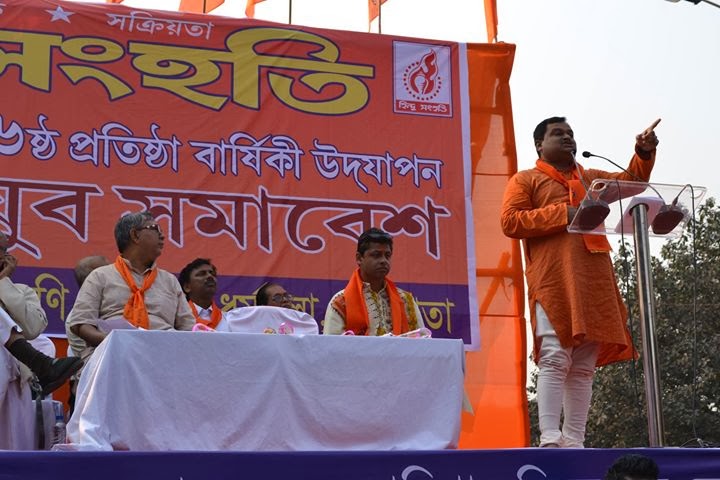 Shri Suresh Chavanke extolling the role of Hindu Samhati to organize Hindus in Bengal at this juncture of history termed when all options to have legal remedies fail, struggles in streets remain the only option. On the word of him, the fact that Bengali tigers are rising up once more happens to be the greatest delight. He also assured that Sudarshan News Channel would stand by Hindu struggle all the time. 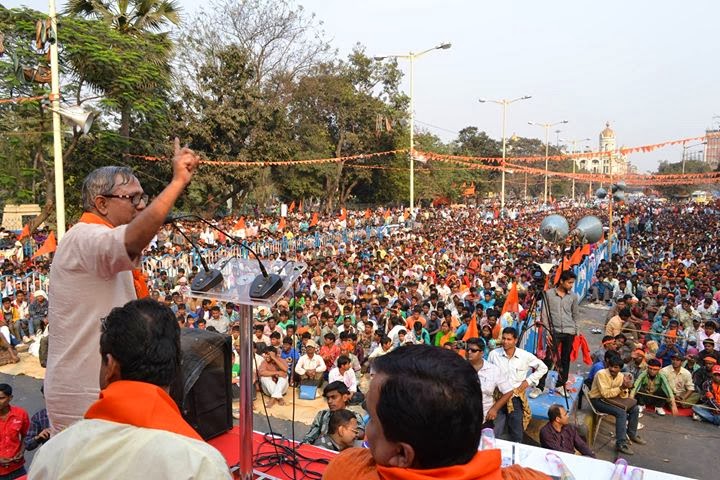 Shri Tapan Ghosh stated straight-from-the-shoulder and depicted how administration, ever since the formation of Hindu Samhati, has been impeding it religiously and behaves as if Hindus are second grade citizens in the country. This year too, like other years, several attempts were made to forbid Samhati from conducting its anniversary and it crossed all limits when the organization was asked to collect the no-objection certificate from Army headquarter, a fact that even surprised the authority there. But Muslim organizations are never behaved with thus and this proves best the condition of law-abiding Hindus in Bengal. Narrating a few heart rending attacks on Hindus by Islamists of late, especially in the rural areas, Shri Ghosh made it clear that ineptitude, morally degraded and subservient police can never save Hindus in Bengal and therefore, if Hindus want to exist, they have to be self-reliant and prepare themselves for violent struggles that can occur anywhere and at anytime.