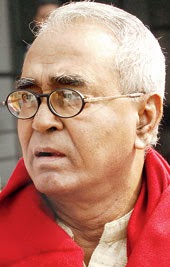 While on one hand his own party or CPIM could not digest his latest avatar and had a sigh of relief through his formal expulsion, on the other hand, his former disciple has maligned him in public and also termed him as the progenitor of burgeoning culture of violence at varied areas in the district of South 24 Paragnas and on the word of local Hindus, he had been the greatest inspiration for Islamic fundamentalism camouflaged under the cloak of universal brotherhood. Such is the wretched fate of Rezzaq Mollah at the moment who was seen of late as messiah of the novel notion of Dalit-Muslim axis in Bengal through his own “Social Justice Forum.” But he is a political outcast just now making pundits get skeptical of his political future. However, he is not spared still and sayings of Shaukat Mollah, his one-time disciple and existing president of Trinamool Congress Canning-II Panchayat Committee and also the chairman of East Assembly Constituency, of him are indeed vitriolic. Nevertheless, Hindus know him better as the main thrust behind escalating persecutions on them by radical Muslims.

According to Shaukat Mollah, Rezzaq Mollah was culpable behind the onset of culture of violence to retain his own suzerainty in Canning. He, to fulfill his own aspirations, built up a private army; youths were invited cordially to join the army and Rezzaq used to supply arms and ammunitions in large numbers and thanks to all these, his aggressive cadres have become branded anti-socials by now and are despised by their family members even. Shaukat Mollah did not end here and went on saying that Rezzaq Mollah had hardly followed any ideals in his political career and in spite of being the undisputed leader in the area, his performance has always been dismal. It is worth to mention, Rezzaq became MLA of the Canning East Assembly Constituency for nine times but locals avow that he has not even tried to better conditions in the environs, let alone Muslims and Dalits. Only violence has marked his career.

In accordance with Shaukat Mollah, there was no college in the area for years while among 9 panchayats, areas including Deuli-1, Atharobanki and Tambuldaha-1 never witnessed any high school. These three panchayats have three junior schools only and hence, after Class VIII students have no way except to drop. Incidentally, Shaukat Mollah, as per his own version, joined CPIM through its youth front and during those years, other than intra clashes in the party no work for development took place. Before any election, Rezzaq Mollah supplied his own cadres with lethal weapons to help CPIM win and make him retain his own fiefdom.

What has been left out by Shaukat Mollah is that the years following 1977 or the year of Left Front’s accession to power have perceived mounting persecutions on Hindus, be it caste or Dalit. Especially, during the days of Marichjhanpi massacre on January 31, 1979, Hindu families in throngs took refuge in Canning and became victims to Rezzaq Mollah’s whims and actions. Slowly but steadily, Hindu started losing their ground in the area and this trend has been continuing till date. The influx of Muslim infiltrators from Bangladesh has aggravated the situation altogether and all these have occurred under the sway of Rezzaq Mollah.