While ravishment of women has become a steady affair in the realm of Bengal and weird silence of administration remains enough to boost morale of crooks, alleged gang rape of a tribal girl on 20 th January by 13 persons in the village of Subalpur under the jurisdiction of the police station of Labhpur in the district of Birbhum has led to a commotion worldwide. The state government is in no mood to find out what went wrong in reality, has demanded corporal punishment of criminals behind the bars already whereas the media is up in arms and custodians of human rights are unanimous in denouncing the entire development. It has been learnt as well, the decision to inflict barbarian torture on the hapless girl was adopted in the kangaroo court (salishi sabha) under the aegis of chieftain. Now the entire hullaballoo motivates a sane mind to contemplate more – if there was any gang rape, offenders must be dealt stringently. But before that the truth must be unearthed especially when villagers are denying any such allegation. The Santhal community remains devoid of any sin altogether and history of theirs corroborates this standpoint as well.

What is the truth then?

Meticulous analysis as well as field survey has brought forth a cruel reality unheard hitherto - no such violation took place on the fateful day and the problem started when immoral relation of the tribal girl to Khaleque Sheikh, married individual and also inhabiting a neighboring village, came to light.  On 20 th January, both of them were caught red-handed during sexual intimacy and to put an end to this, both Khaleque and the girl were tied to a tree. It is worth to mention, the tribal girl lives with her mother while her brothers live elsewhere and also prefer to steer clear of her. Her mother was not in the house, on that evening, and they decided to exploit the situation to gratify their carnal desires. According to locals, the girl had been in Delhi for years and she remained gaga of a colorful lifestyle always.  After both were tied to a tree, elders of the community were summoned and no less than 400 villagers encircled the tree throughout the night. Without doubt, the couple was abused verbally.

On 21 st January, in the morning, the kangaroo court (salishi sabha) took place and a written judgment was also delivered. The written judgment mentioned clearly, Khaleque Sheikh was the second party to the dispute while villagers were the first one and a fine of Rs. 25, 000 was slapped on Khaleque. But this fine was verbal and was paid by Seikh Farookh, elder brother of Khaleque, who appeared there at 10.30 am with Ajay Mandal, panchayat member from local Trinamool Congress. Once the fine was paid, Farookh took his brother and none of them was seen for the rest of the day. The judgment states clearly that Khaleque Sheikh had been freed eventually and was delivered to Farookh, his elder brother. The tribal girl was also granted freedom simultaneously. She remained normal till 2 am on 22 nd January as well. But the rot started after then; she went to the police station of Labhpur, located at 7 km away from Subalpur, on her own bicycle to file the FIR. The FIR states that she had been gang raped by 12 tribal and 1 non-tribal Hindu. This was followed by the visit of a police team on the same evening at 6 pm who charged 4 tribal people and whisked them away. The abrupt development incensed villagers lots. Hence, to free innocent villagers, they went to the police station en masse and learnt from police that an FIR criminating 13 people for gang rape had been filed. The remaining group of 9 people was found amid villagers in the police station, they were separated and villagers were assured of an amiable resolution within the following morning. The alleged victim was sent to Labhpur rural hospital already and then to Suri hospital.

What followed next was political mud slinging and entry of political parties into the dispute for benefits but none has the courage to spell out the cruel truth. The government, on the other hand, to verify its virtue (contrary to other incidents sullying Bengal’s reputation of late) removed C. Sudhakar, Superintendent of Police in the region. But the truth was preferred to be shrouded. Hindu Samhati, owing to its association to the tribal society through years of struggles, smelt a rat from the very beginning and thanks to its undying efforts, tribal peopled refused to cede and explicated a few hidden truths as well.

As per them, the entire conspiracy was hatched by Manirul Islam, reigning MLA of Trinamool Congress and an ardent vanguard of CPM till a few years back and this is fallout of the continual struggles between tribal people and Islamists in the region. On 27 th January, a team of Hindu Samhati visited the village of Subalpur to help persecuted villagers and also to appraise the situation. It was learnt then, the self-styled victim girl had mentioned in the FIR that Khaleque Skeikh, inhabiting the village of Chouhatta, went to her residence to talk about their marriage. Ironically, Khaleque is already married, father of two children and if the account of Hasina Bibi, present wife of Khaleque, is to be believed, their 15-year-old daughter is about to marry.  Khaleque was retaining this illicit relation through rendering lots of money to the girl and as per the whole village, this is nothing save for prostitution. The girl had been warned lots before but she refused to abide by the village’s custom. The dispute refuses to end yet even if medical examination of the victim girl nullifies the complaint of gang rape. 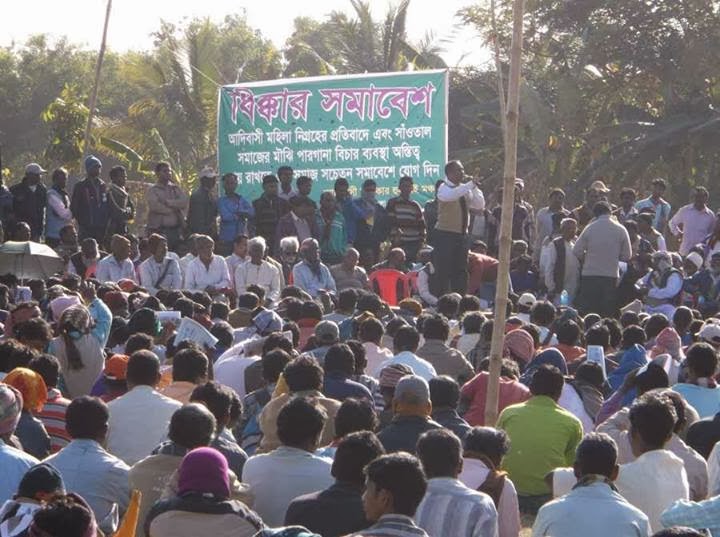 But irate tribal people are in no mood to withstand this venom along with mounting raids of police.  On February 2, "Adibasi Adhikar Hoolsai Manch", well-known tribal organization, convened a mammoth gathering of tribals from across India in the village of Kamarshal under the Block of Sainthia in Birbhum. Even if the permission for the meeting had been given, it was withdrawn later. However, sensing that any such act would egg on greater problems, the ban on the meeting was revoked ultimately.  The protest march, led by Adivasi Adhikar Hoosai Manch, started from Ahmadpur railway station and ended at Dhobajol Primary School ground or venue of the mammoth meeting. While it was addressed by national and state leaders of tribal society, the convention also asked the government to shun any idea to stop the thousand-year-old justice system prevailing the tribal society and also to release 13 tribal people from Subalpur arrested on false charge immediately.

dhronacharya said…
Great work being done by HINDU SAMHATI. My pranams to you all who are involved, for your energies and persistent efforts. May Maa Durga protect you all the time!