Who cares for a Hindu police officer in Bengal? 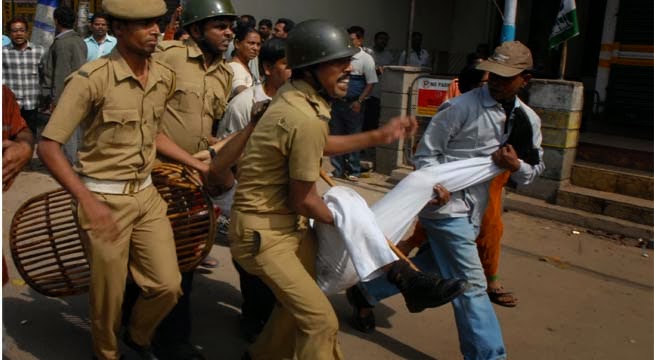 It was just a year back when Tapas Chowdhury, Sub-inspector of Special Branch of Kolkata Police then, was killed in broad daylight before the presence of all, including press/media correspondents.  What is the present scenario now? While his murderers are found to roam freely, Tapas Chowdhury’s family writhes in pain. The macabre incident took place on February 12, 2013 at Harimohan Ghosh College in Garden Reach, Kolkata, following violent clashes between the student organizations of Trinamool Congress and Congress leading to a complete ruckus in the area. It was also the day of filing nomination papers for the imminent student election in the college and apprehending steady decline of law and order, a large contingent of police had been deployed from the morning; slain Tapas Chowdhury was also among them.

The problem started around 11 am when a band of miscreants, led by Mukhtar (infamous crook and allegedly confidant of local Congress leadership), attempted to break main gate of the College and rush in. Witnessing such a provocative enterprise, goons supported by local Trinamool leadership geared up and hurled brickbats and crude bombs on them. There was a retort and law and order situation in the adjoining area crushed. It was asserted by Firhad Hakim, Urban Development and Municipal Affairs Minister, Tapas Chowdhury, to stop the fast deteriorating situation, chased after Mukhtar who in his own defense fired injuring the police officer grievously. Despite he was rushed to the CMRI Hospital, Tapas Chowdhury succumbed to death. Cheema, accomplice of Mukhtar, was arrested with crude bombs from the CPM zonal office close at hand.  Nevertheless, this assertion of Bengal Cabinet Minister was abjured by a television recording airing that the pistol-wielding felon was none save for Sheikh Suhan, nephew of Muhammad Iqbal (Munna) or the Trinamool councilor, Chairperson of Borough no. 15 of the Kolkata Municipal Corporation as well. What followed next in the metropolis was a spate of accusations between political parties.

Even if police filed a case against the Trinamool councilor and a high-level probe was ordered by Bengal’s Chief Minister, justice has proved to be the casualty in this one year. Three convicts including Muhammad Iqbal have been released on bail already and they are found to roam in the area with poise. The bereaved family was assured of all possible helps and in this period, apart from having benefits from insurance accident, state government and Chief Minister’s relief fund, job of Tanusree Chowdhury, slain cop’s daughter, in the Special Branch of Kolkata Police, is the only compensation. How is the grief-stricken family now?

When asked, the family lamented as slain Tapas Chowdhury is yet to have the Dignity of a Martyr. Albeit, his colleagues have been maintaining a close relation with the family and helping them in all possible ways, it seems neither the state government nor higher officials in Police remembers his sacrifice any more. No high-profile police official has visited them in the whole year and now it seems to his wife, Minati Chowdhury, that the sacrifice of her husband has been in vain. Nowadays, she, owing to release of convicts, remains worried of her children’s security for all time. Any vengeance by them will ruin the entire family and none will help them as they do not belong to minority community.