Not an inch should be given to Hindus in Bengal to carry out their religious rituals and if they protest against this administrative diktat, they will be subdued– this brutal concept was witnessed today in Tehatta, District: Nadia, when police fired bullets to end Hindus’ strike against administration’s bid to withdraw permission to let Hindus conduct upcoming Jagaddhatri Puja peacefully.
One Hindu youth named Ashoke Sen (age 35) has been killed while the other one – Sudhamay Ghosh (age 27) – is critically injured and has been transferred to Kolkata owing to fast deterioration of health.
Hindus in village: Tehatta PWD para, P.S. Tehatta, District: Nadia, to conduct the upcoming Jagaddhatri Puja sought administration’s permission to help them find out a small land. It has been learnt, local SDO asked BLRO to do the needful and a small land was allocated to them also. And that irked Islamists; the sole reason being the land’s position – it was alongside the ground meant for namaz of Muslims. 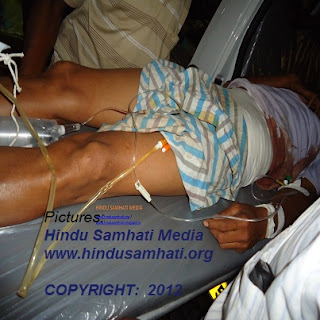 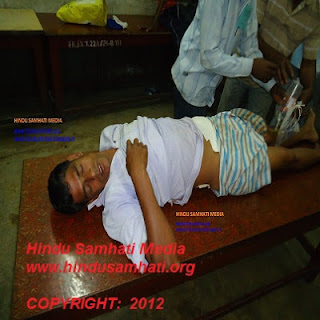 To nip any Hindu desire of celebrating Jagaddhatri Puja with grandeur in bud, Islamists, led by Zulfikar – a CPM–sponsored criminal, exerted strong pressures on local police and administration. And the administration surrendered to it. Permission, given earlier to Hindus to carry out Jagaddhatri Puja, was withdrawn hence leaving Hindus infuriated.
As a mark of protest, Hindus, forming a coordination committee of clubs organizing Jagaddhatri Puja, opted for a general strike at Tehatta today itself.
Today, in the morning, Hindus assembled in the streets of Tehatta to make the strike peaceful and also thriving. Jagaddhatri Puja committees were also having a meeting at that time.
To quell Hindus’ spirits, police, veiling under a cloak of friendship to Hindus, breached in every manner. When Hindus dissented, police retorted at 9 am by firing the Hindu mob.
The whole of Tehatta is stunned by grief, at the moment. Police is patrolling round the clock – apprehensions that Hindus may suffer more (in coming days) are getting apparent. RAF and additional forces have also been deployed.

----------------------------------------
Addendum:
Sudhamay Ghosh (age 27) – Hindu victim and critically injured – is at NRS Medical College, Kolkata at the moment. Contrary to expectation even, bomb bursting has been cited as the basic reason of his wound. When he was being submitted to the Kolkata medical institution, Sudhamay was bleeding profusely.

Unknown said…
c'mon guys .... grow up... it is an old saying that one should not speak without having proper knowledge.... what do you expect the police personnel to do ... when their wives and children are being attacked by some hindu fundamentalists, who were trying to gain some political stand for the upcoming panchayati elections. POLICE was trying to sort out the matter through peaceful means, when suddenly, from within the mob few of the protesters resorted to the violent measures, by throwing out bricks and stones on the officials. POLICE being helpless had to lathi charge in order to disperse the mob. Within the mob, there were few people , who were even carrying arms and hand grenades. i know this sounds strange , but being a border region it is not impossible. they retaliated with arms and arrows and chased down the SDPO and his fellow policemen upto his residence. at that point SDPO's Wife and his one year old child was present and the unruly Mob, thrased away his articles, broke his window glasses and threatened his life. he was left with no other option other than to save his and his families life. he was also at the same time trying to pick out the persons who were provoking the mob and were armed. The person killed was no angel, he was one of the notorious kind of perosn, who has a a history of being involved and provoking the situation. even for collection of donation, he resorted to violence numerous no. of times, even harassing the senior citizens.
Earlier on the issue of land. the prescribed land belongs to PWD or to the govt. It has been a source of dispute for numerous no. of times. Hence the local administration decided that neither of the communities , whether hindu or muslim will perform any kind of rituals or use it for religious purpose. To this decision, muslim community responded quite peacefully and obeyed the order, they didn't perform the namaz ritual during the Festive time of Bakrid, but when it came to hindus, they disobeyed the decision, to which they previously agreed, and tried to set up a barrier in order to mark it as their piece of land. In response the administration warned them, and dismantled the barrier. In order to facilitate the hindus for performing the jagadhatri puja, they gave away another patch of land just 30 ft away from the disputed site, which was lot bigger and better, while the previous one was filled up with water upto 1 ft. But these hindu fundamentalists people were adamant on their demand, endangering the peace of the region. Earlier on the incident day, it was announced that a bandh would be called up against the administration, but suddenly in order to pressurise the govt. they performed a road blockade. in ten minutes, IC and SDPOvisited the spot and tried their level best to persuade them in removing the blockade. But the politically ambitious groups, were cooking their own porridge and this whole simple event turned into such a big chaos. don't assume that this is a muslim blogger, i am a hindu, but will always stand with the justice.
November 15, 2012 at 12:20 AM

Anonymous said…
robinhood pandey may claim to be Hindu, but he is a total dhimmi. Since when have muslims followed any order peacefully? There is Calcutta high court as well as supreme court order against cow slaughter during eid. Do muslims follow that order? Did robinhood condemn this muslim practice? If you stand on the side of justice, why have you never condemned muslims for flouting high court and supreme court orders? You are not on the side of justice, but on the side of muslims because you are a total dhimmi. Shame on you!
November 15, 2012 at 9:29 PM