Even a single death (better to say plotted killing) can send shudder through spine of the witness or listener and Sukumar Haldar (age 52), an innocent Hindu individual, inhabitant of village: Dhanpota, Block: Mograhat, P.S. Mograhat, District: 24 Paraganas (South) had same form of death.
. 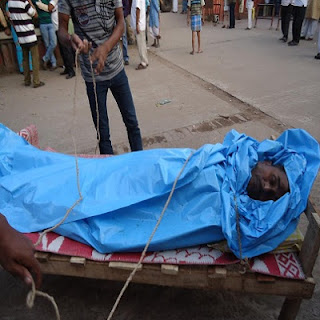 Corpse of Sukumar Haldar﻿
.
.
On November 15, 2012, at 10 am, Sukumar became party to a funeral procession to crenate a dead person of the same village in the crematorium at Durgapur, P.S. Joynagar. Debasish Haldar, his son, was also in the procession but at a distance as he was in his motorcycle.

In the middle, Debasish had a brief altercation with two Muslim boys riding a bicycle and coming from the opposite direction. However, even if he had made no mistake, to save the situation, Debasish asked for pardon. The brawl ended there.

There is one petrol pump alongside (almost) the crematorium at Durgapur. While Debasish passing by past one Islamist prevented him from moving further and started admonishing him using indecent words. Hearing such a sinister development, Sukumar Haldar rushed to the same pump. As soon as he reached the spot, Sukumar was asked of Debasish. Sukumar Haldar identified him as his own son. Just then the Islamist gave a blow on his chest; the aged Hindu individual, owing to this unexpected attack, fell on the ground. But blows went on till Sukumar Haldar got unconscious. The attack was so sudden that it left even his son stood stupefied.

To save his injured (excessively) Debasish took him to Bhaben Nursing Home at Dakshin (South) Barasat where he was declared dead in the evening.

The gruesome incident occurred since Debasish dared to altercate with the two Muslims boys riding bicycle!!!!!!!!!!

This is also not a rare development. The crematorium at Durgapur remained witness to a battle royal or hand-to-hand fighting between Hindus and Muslims only on Kalipuja held on November 13, 2012. Hindus, as a part of celebration of the Puja of Devi Ma Kali, Hindus organized Torja Gaan (contest of songs composed extempore). Lots of Hindu families, to participate in the contest, came from several areas in the vicinity and Hindu women became subject to obscene taunting of Islamists assembled there. Hindu youths resited them leading to a bitter fight between the two groups.

Even if a formal complaint was lodged then against culpable Islamists, police did not feel the need to nab them. The silence enhanced Islamists’ confidence that led to the death of innocent Sukumar Haldar.

Are Joynagar and Mograhat beyond the capacity of Indian administration to govern?