November 26, 2012
Rezzaq Mollah, ex-minister, emphatic leader and also the most ardent Muslim face of CPIM is back to pavilion from Haj and his successful visit has stimulated Islamists in Bengal no doubt. And the best manifestation of it is the escalation in the numbers of Muslim visitors including clergymen, politicians and intellectuals at his residence. The most notable of them is Maulana Siddiqullah Chowdhury, state secretary of AIUDF. 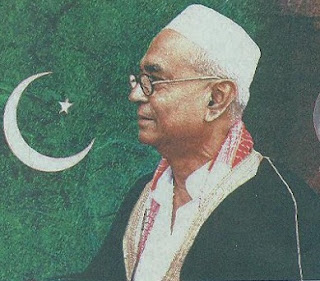 It has also been learnt, Badruddin Ajmal, MP and all-India president of AIUDF, has also congratulated Mollah on his great success – especially, the way he had defied his own political party’s atheistic notions and went for Haj.

Siddiqullah Chowdhury , in his meeting with Rezzaq Mollah, made it clear that unless Muslims in Bengal get united, they will remain deprived and according to him, neither CPIM nor Trinamool has done anything beneficial for Muslims in Bengal (?). He also requested Mollah to mull over issues like Muslim – Dalit unity as he would not be able to better Muslims from within the shackles of an atheist party.

Rezzaq Mollah, it has also been learnt, has stated that he would support any effort of Siddiqullah Chowdhury. He has also requested Siddiqullah to establish a platform to extend and strengthen Muslim – Dalit unity in Bengal as soon as possible.

Naya Zamana — a similar socio-economic outfit formed by Rezzak Mollah himself – is going to play a major role in strengthening Muslim and Dalit unity across Bengal.