March 12, 2014
Even if the largest number of Muslim candidates (ever since 1947) has been fielded by political parties in Bengal for Lok Sabha Election, 2014 under the slogan “All for Muslim Votes” barefacedly, the approaches have failed to gratify the everlasting desires for more power ostensibly and hence, it’s the time to flex muscles to have more. This is not any fiction but the gist of the surge in radicalism among the followers of a “peaceful religion.” Nothing else can express the wild ruckus created on March 11in Kolkata by Islamists as part of a protest against a picture published in the Bengali daily ‘Khabor 365 Din.’ The tabloid entertainment supplement or ‘Bibi’ of the newspaper published a few photographs of nude women protesting with Arabic texts and perchance the name of Allah and Muhammad in their bodies against persistent oppressions of Islam on women across the globe. The story was continued in the pages 4 and 5 of the tabloid too. Even if the nude protest of women took place at Paris Louvre Art Museum’s Square on International Women’s Day, Islamists went berserk in Kolkata.


It has been learnt from international press, the protestation was spearheaded by Arab and Iranian women to march naked demanding equality and secularism in the Islamic world. The group included Tunisian activist Amina al-Souboui, Egyptian Alia al-Mahdi and five other Arab and Iranian women. The protest was organized by Safia Lebdi and national flags of Tunisia, Algeria, Egypt and Iran were waved during the demonstration.

Paris is faraway from Kolkata but this reality could not restrain radical Muslims in Kolkata always in the hunt for opportunity to prove their worth before the crucial Lok Sabha Election. What happened in Kolkata in the busy noon in the Park Circus Area was the reiteration of the violence against Taslima Nasreen on November 21, 2007 making then Left government oust her from the city. Felons, in front of a fairly large police contingent, this time went on conducting every illegal job including recurrent attempts to assail the civil society, burning down vehicles. Public properties were also smashed up while police and administration was found to be more conscious to maintain law and order. Imam of Nakhoda Mosque along with Firhad Hakim, Urban Minister of the State Government of Bengal as well as leader of Trinamool Congress, rushed to the spot to quell the virulent mob allegedly but the frenzy continued for hours.

As per latest reports, a few journalists of the Bengali daily were taken into custody. They include Abhijit Majumdar (Assistant Editor) and Amit Banerjee (Editorial Coordinator) and were stranded in lock up for hours. 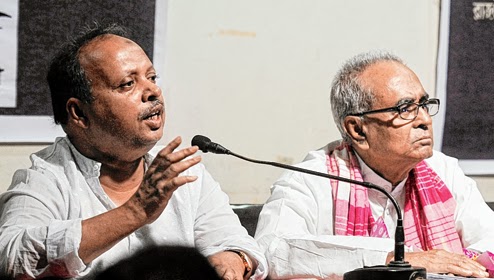 But the narrative can’t end here without the reference of M. Nuruzzaman, MLA of Trinamool Congress from Deganga, who was found strident against his own party for fielding less number of Muslim candidates in the imminent Lok Sabha election than expectations. This is perhaps no uncanny event in the present scenario in Bengal and happened on March 10 when he shared dais with Abdur Rezzak Mollah and Nazrul Islam (ex-IPS officer) on the occasion of revealing a special edition of Udar Akash named 'Paschime Surjyodaya.' The magazine is edited by Farooq Ahmed while the edition contains articles of lots of writers including Abdur Rezzak Mollah and Nazrul Islam. Trinamool MLA was found to state that lack of Muslim candidates has discontented a considerable section of Muslims in Bengal while Mollah was witnessed to state, "Why shouldn't the CPM's district unit in the Muslim-dominated Murshidabad have a Muslim as party secretary?"