Will Sarmistha return to her shocked parents ever? 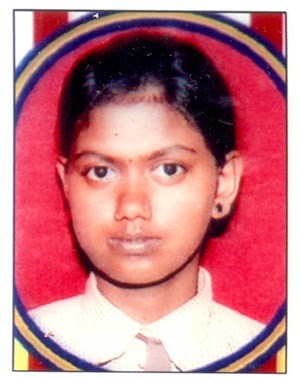 While political confrontations with soaring violence are getting widespread through the length and breadth of Bengal, the chronicle of Love Jihad has entered another phase with a novel strategy. Gone are the days when a Hindu girl was allured and snatched by a Muslim youth furtively under a Hindu anonym; nowadays these sinister developments are taking place overtly, by bullying the Hindu family in public. This approach came forth on March 21 in Howrah when Sarmistha Sarkar (age 16 yrs), student of Class VIII in Dharsha Prahlad Das Girls’ School at Dharsha Kajipara in Howrah, was abducted by Becha Mallik, age 45 and a Muslim Black Magician by profession. Sarmistha is the daughter of Swapan Sarkar and Lakshmi Sarkar, living in Satashi Uttarpara, GIP Colony within the jurisdiction of Jagachia police station in Howrah district. 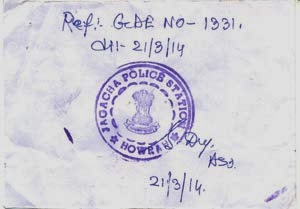 Prior to narrating anymore, let’s focus on Becha Mallik. According to locals there, Becha is both infamous for profligacy and molesting Hindu girls in the area. And only a couple of years back, Manashi, another Hindu girl, committed suicide thanks to him. However, a few natives maintain that Manashi was virtually poisoned to death. Now, on the fateful day of March 21, while going to school Sarmistha was snaffled by Becha, learnt to have a mesmeric influence on her, and taken somewhere, yet to be ascertained. Meanwhile, her father, Swapan, learnt from a few students including Sarmistha’s best friend that she didn’t turn up in the school. The worried couple awaited her return till 8 pm, but finding no other option, they decided to proceed to the police station of Jagacha. A formal complaint was filed at 9.30 pm (General Diary No.: 1331 dated 21.03.2014) by Sarmistha’s mother Lakshmi Sarkar against Becha Mallik. Police proved to be congenial to the distressed family and escorted them to the residence. Binodananda Banerjee (alias Biltu), local Trinamool Congress councilor, was also approached, but he was found to be reluctant to the incident and the hazardous fate of the adolescent girl, Sarmistha.

It has also come to knowledge; the abduction is not the first portrayal of Becha’s lust for Sarmistha. Since Becha is known as a Muslim Tantrik in the area, the wretched Sarkar family asked him four months back to relieve their third child, a boy of 8 years, from recurrent pains at the back. At that time, Becha captivated Sarmistha and pledging to better her life thru marriage, he took away her ration card and clothes. The revelation came as a brutal shock to the Sarkar family and when her mother, Lakshmi Sarkar, reached Becha’s residence seeking her daughter’s clothes and ration card, she was beaten hollow by almost all of Mallik family. Again, Becha’s complicity in the episode of March 21 was conveyed by Sheikh Iqbal, an amiable neighbor to the Sarkar family and according to sources, Rakhi, who serves daily meals to Becha Mallik, communicated Sheikh Iqbal of the same.

According to Sarmistha’s parents, she was abducted forcibly, and since she was panic-stricken Sarmistha failed to raise an alarm. 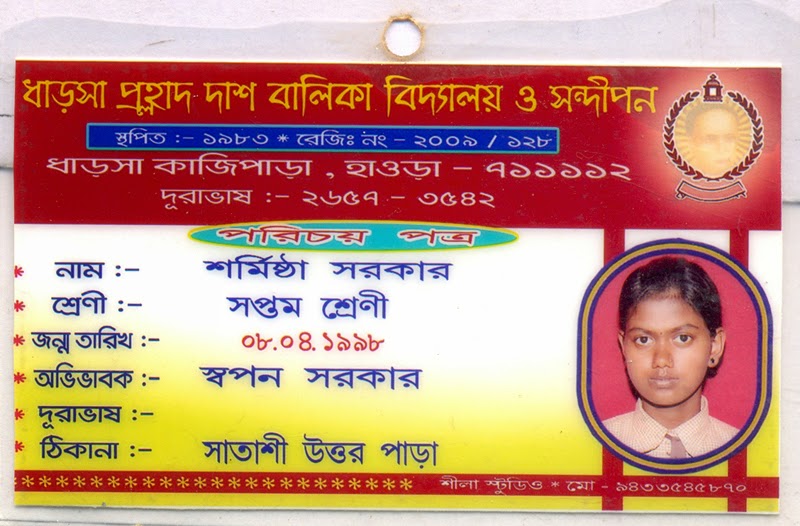 The story fails to end here as Becha Mallik phoned Lakshmi Sarkar on March 25 at 7.30 pm and abused her for filing complaint to police against him. Sarmistha Sarkar has created a new chapter of Love Jihad depicting how a sane Hindu girl can be coerced by an Islamist. Her horrified family today came to Hindu Samhati office and approached its President Tapan Ghosh to help them to recover their minor aged beloved daughter.

Unknown said…
In Bengal, including Kolkata City, Love Jihad, Land Grabbing, forcible conversion to Islam is taking an ugly turn in many places, Khiderpore, Raza Bazar, Metiabruz are few example areas, if we do not stay alert & protest , the day will come Hindu families will have to leave these areas.Mamata Bannerjee Govt turns a blind eye towards this.
August 25, 2014 at 8:43 PM