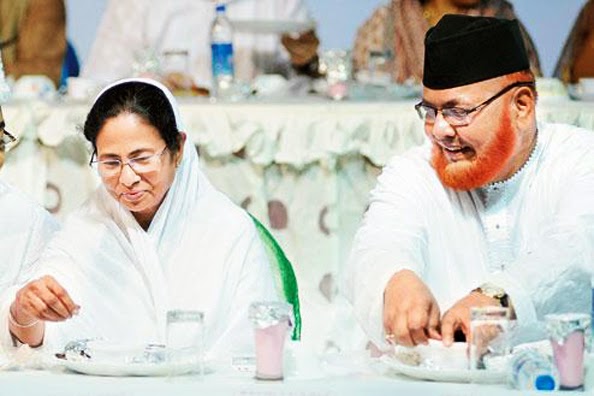 When political parties and their leaders are joining the bandwagon to assuage Muslims in Bengal, how can the Shahi Imam of Tipu Sultan Mosque in Kolkata be far behind? The long wait has come to an end at last and Maulana Nurur Rahman Barkati, pro-Trinamool Shahi Imam of the Tipu Sultan Masjid or famous more as mentor of Bengal’s Chief Minister these days, has broken his silence. He has asked Mamata Banerjee to step up opposition against Narendra Modi and dash his dream to become Prime Minister of India to the ground. The aspiration is grievous enough to dismantle the entire country or ravish the country’s secular image across the globe, as per him. How can this be done? In this case, he has suggested her to abide by the straight-from-the-shoulder talking style of Rahul Gandhi who barely misses a chance to pick Narendra Modi and his cohorts, termed as harbinger of an ideology of hate or Maut Ka Saudagar already. While to taking to press recently, the Shahi Imam made his views clear stating a person like Narendra Modi or notorious in every capacity is not fit to be the prime ministerial candidate of India. Ascension of Modi to New Delhi will be the final nail in the coffin of secularism in the Indian society.  Maulana Nurur Rahman Barkati has also urged other political parties including CPIM and Congress to intensify their opposition to the Hindu ideology of hate. However, pundits opine to replace the word urge by a command.


Trinanmool Congress, witnessing the fats changing mindset throughout India, seems to be more cautious than ever before. Or else safe remarks of Partha Chatterjee, senior leader of Trinanmool Congress, like reiterating the position of Trinamool Congress against communalism or the pledge that they would not be with any communal forces would not have come forth.

And the statements of Shahi Imam can’t be taken lightly as well. On the word of researchers, Muslim votes do play a key role in 240 seats of the impending Lok Sabha Election, 2014 while the community forms 30% of Bengal’s population. No political party can take hold of the center of power at the Indian capital, disregarding this mammoth number. Experts do feel that this realization is propelling BJP and its prime ministerial candidate to shrug off the anti-Muslim label fast. Alleged secular political parties are fighting tooth and nail to earn the confidence of scattered Muslim communities across India.

Nevertheless, a few Muslim organizations have also been found to support the same Modi wave for a better India but the revered Shahi Imam of Tipu Sultan Mosque has no qualm to term them as Mirzafar or worst traitor to the Muslim community’s interest. All of them have been criminated as secret agents of Hindu nationalist organizations and as appointees to retain supremacy of Hindus only. He has also advised Muslim organizations to file cases in High Court against Modi and his associates for the genocide of Muslims in Gujarat, 2002.

Before I go, Shahi Imam has termed Anna Hazare’s skipping Trinamool Congress’ meeting at New Delhi as a blessing in disguise. Anna Hazare happens to be an agent of Hindu nationalists, according to him.