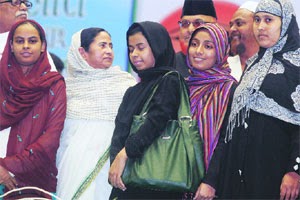 While diatribes against Hindu communalism, especially before the impending parliamentary election, refuse to die down, Bengal has experienced a new milestone in its journey of polarizing the chronicle of education. The malice of reservation for Muslims in education has entered the segment of Engineering education finally and according to the state government’s latest decision, 50% of seats in the minority community controlled engineering colleges in Bengal will be reserved for minority students from this year. Students will be admitted to those colleges through an examination but not the conventional Joint Entrance Examination. This examination will be conducted by the Association of Minority Professional Academic Institutes or AMPI. The Higher Education Department issued a circular in this context, on March 7.

On the word of officials in the department, the new examination will take place on May 7, 2014 and through this students will be admitted to the discipline of Pharmacy also. What will be the fate of remaining 50% seats? It will be based on results of Joint Entrance Examination held across the state every year. As per the new rules, the number of reserved seats for minority students in the discipline of Engineering is a little more than a 1, 000.  It has also been learnt, Muslim students will get priority in Muslim community controlled engineering colleges and the same rule will be followed regarding other minority institutes. In case, reserved seats remain vacant in any institute, students of other religious communities will be considered.  And if there is any vacancy still, general students will be accepted.

Is this possible? As per the circular, admission through the minority entrance examination has got to be completed before the initiation of Joint Entrance Examination’s counseling. Following it, the number of vacant seats will be sent to the JEE Board by each minority engineering college and then the reserved seats will be converted into the general category. JEE Board will admit students in those general seats through counseling. When the JEE was asked that such a procedure violates the saga of secularism as prevalent in India, it answered briskly that no such reservations for students of minority religious community students is possible within the framework of JEE. This proposal, if JEE is to be believed, was given by AMPI. And since this proposal abides by Article 30 in the Constitution of India or regarding the Right of minorities to establish and administer educational institutions, state government of Bengal gave its consent.  An advisory board headed by Mr. Pradipta Roy, retired Justice, has also been formed to retain transparency in every aspect.

Is there is any need of this? Well, a member of AMPI has termed it as need of the hour. In accordance with researches, there are five engineering colleges administered by the minority communities in the state and while four of them do belong to Sikhs, one belongs to the Christians. But this simple theory has been dissented by many already. They do opine that the entire process and enabling Sikh and Christian engineering colleges to work on autonomously is a mere tokenism and it is to camouflage the vicious schemes of Islamists to flood the state with their own educational institutions.

It is known to all that the West Bengal Backward Classes (other than SC and ST) (Reservation of Vacancies in Services and Posts) Bill, 2012 has benefited Muslims in the state highly. Mamata Banejee, while attending Eid-ul-Fitr at Red Road in 2013 stated publicly, “We want your children to become doctors and engineers. We want Muslim children and youth to advance in studies. Reservation of seats in higher education will be introduced from 2014.”