No respite for Hindus in Bangladesh; Brutal attacks a norm now 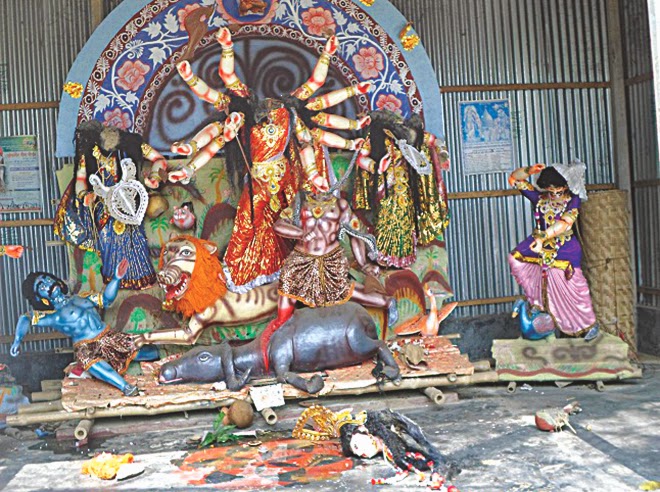 Myriad accounts on Hindu persecution in Bangladesh have already been published. Even so, there will never be any end to this too since brutality on Hindus there is a settled fact and will go on till the last Hindu remains. No matter what are the diatribe of Sheikh Hasina and lip service Khaleda Zia against fanatic and radical Muslims, Hindus are being persecuted and this brutal tradition has been going on ever since 1947.  On February 25, Islamic miscreants (yet to be taken into custody by local police station) defiled and destroyed Holy Deities in the temple worshipped by local Hindu community and the atrocity took place in Bathania Chala within the sub district of Kaliakoir in the district of Gazipur. On the word of Dilip Kumar, member of Sarbojanin (public) Temple Committee, all deities in the temple including Durga, Laxmi, Saraswati, Kartik, Ganesh and Asur became worst victims of the outrage. Severed heads of hallowed deities were found in the field before the temple and to terrify Hindus more, faceless assailants left a note asking them to convert to Islam or move to India en masse.

In accordance with Surja Mohan Sarker, general secretary of the Temple Committee, the temple was closed at 7.30 pm and the brutal reality was found out in the next morning. Prior to this on February 10, two sanctified Deities in the residence of Nepal Chandra Barman, inhabitant of Gachgari area in the same sub district, were desecrated. An official complaint was filed in the local police station of Kaliakoir. But, as expected, police is yet to get hold of culprits. 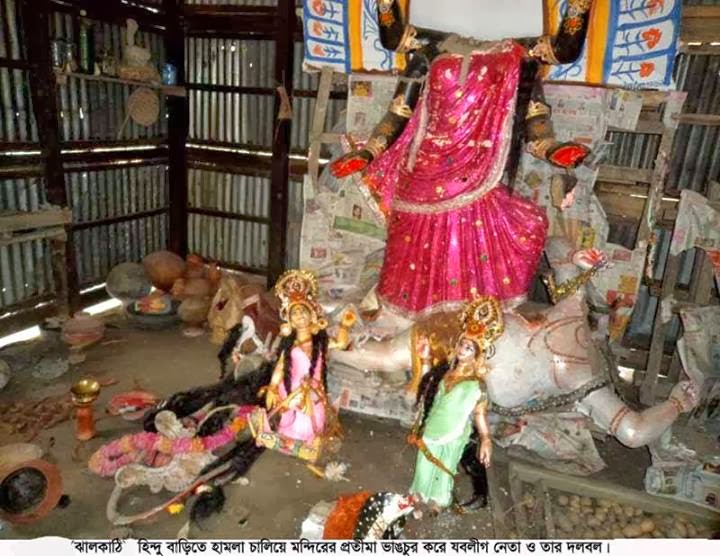 Even if the police station of Kaliakoir has been found to term the atrocity as handiwork of Jamaat cadres, an outrageous brutality or persecution on a Hindu family was carried out by a local leader of Jubo League (youth front of Awami League) and his cohorts also of late. This nefarious event took place on March 4 at 10.45 am in the residence of Biswas family inhabiting the village of Suktagarh following a dispute on land. The village is located in the sub district of Rajapur within the district of Jhalkathi. According to Nayan Biswas (member of the tortured family and also a victim to the ferocious attack), his uncle named Amulya Biswas had sold 24 cottah land to Khaleq Mian, father of Siddique Mian, local leader of Jubo League. However, laying claim that a portion of the sold land was within both the residence and temple of Biswas family still, Siddique Mian and his henchmen (a group of 50 armed criminals) attacked the family all of a sudden on the fateful day. Both the residence and temple were ransacked before long and apart from robbing an amount of 50, 000 taka with gold jewelries and thrashing Hindu members of the family, sanctified deities in the family’s temple were desecrated and also destructed. The cowshed was also burnt down. Even children were not spared as well.

It has come to knowledge, police has arrested Siddique Mian (age 45), president of No. 8 ward of Jubo League, and Liman Hussain (age 25), son of Lavlu Khan, inhabiting South Alekanda in the district of Barisal, in this regard. Albeit police has assured them of all possible helps, the Hindu family is in extreme fear at the moment.