April 29, 2013
Even if the Hindu-Muslim conflict in contemporary has become all-time high by now and that the same saga is on the rise, a few persons, not morons but swindlers, are found to think of peaceful settlements still. The sole intention of these defrauders happens to be deceiving Hindus and deprive them of their natural rights to exist. Unfortunately, a large section of Hindus heed these people, whether politicians or mere seculars, and get ruined ultimately.

Have there been no such evil advices Hindu resistance against Muslim radicals must have been better than now. What should be done then? Hindus, especially Bengali Hindus, preferring to better others by ruining themselves, ought to comprehend the reality – there has never been any peaceful solution between Hindus and Muslim radicals and hope of any such is the best fiction in recorded history.

If the anecdotes and historical accounts are taken into consideration, the conflict is older than a millennium and the entire account is filled with Islamic onslaughts and Hindu persecution altogether. Whenever there has been any approach by Hindus to Muslim radicals to live peacefully, there have been rebuffs from Islamists only, influenced by the chronicle of Dhimmitude.

Hindus have got to get the clear picture, grasp outrage of Bengali Hindus in neighboring and find out where are they at the moment in .

The picture attached herewith (result of comprehensive, painstaking researches of more than decades) bring the brutal reality forth.

Unless, Bengali Hindus prefer to be deceived by the alleged humanitarian ideologies and their agents, there is no hope for them to exist even, let alone development and living as self-respecting human beings. 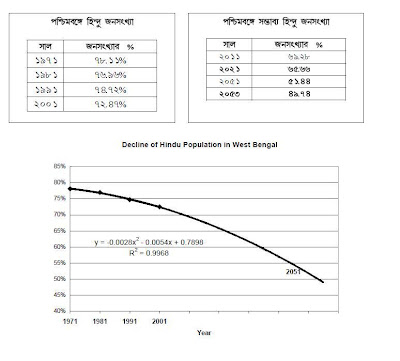