Is Islamic Bangladesh nearing its End?

April 18, 2013
What troubles the whole of at the moment is the show of strength of both Islamists and progressives and their uncompromising attitude – both are heading towards a clash – bloody and decisive that will settle the future of or the end of it. This, however unfortunate it is, happens to be the most dominant belief within the Bangladeshi populace and not they fear loss of job or means of livelihood only but many of them have started to consider that harrowing days of 1971 would return soon – they will become stateless people once more.

What many of them consider is that Bangladesh, one of the poorest countries across the globe, remains devoid of any industrial infrastructure and global mercantilism accordingly and the months-long conflicts stemming from Shahbag struggle and its anti-thesis is making the country near the permanent destruction.

Hindus, already battered through decades, will also move towards the same oblivion. Well, they have nothing to say in this context as their status in an Islamic country like is of silent spectators but not of speakers.

Will other countries get a time to say? It is unpredictable yet – and as far as Muslim radicals on the other side of the border are concerned they will go on fighting for the eternity.

Senility and not serenity marks an Islamic culture. 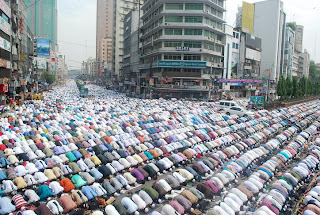 (Muslim Radicals praying in the streets of Dhaka)