Trouncing devilish intentions of Bengal administration to end Hindu struggle through confining Tapan Ghosh, president – Hindu Samhati, on flimsy grounds for days, Hindu Samhati has won an arduous struggle – Tapan Ghosh has been released  finally. Other key activists of Hindu Samhati including Bikarna Naskar, Saurav Sasmal have also been bailed out by a reluctant judicature evidencing the same notion once more – Truth can’t be suppressed for eternity.

Speaking on his own experiences during confinement, Tapan Ghosh said, “I have experienced 2 jails, 3 courts and a few lockups in these 19 days. But even if the administration has been forced to free me, I can be arrested at anytime since the government is hell-bent to restrain me to stop Hindu struggle in Bengal. The Trinamool-led Bengal government has surrendered to Islamists and is leaving no stone unturned to pacify them to grab their 30% electoral strength in the state. And under their instructions only police is resolute to malign Hindu Samhati and its activists through thrusting false cases on them.

What they do not know is that Hindu Samhati is fighting for Dharma and since this is a divine responsibility, no force can subdue them ever. The effects of Hindu Samhati’s strenuous struggle are easily discerned these days; a Hindu regeneration in Bengal has commenced and it is steadfast to save the state from Muslim radicals.

It is the time for more Hindus to sacrifice and join the historic struggle of Hindu Samhati to save Bengal from Islamists.” 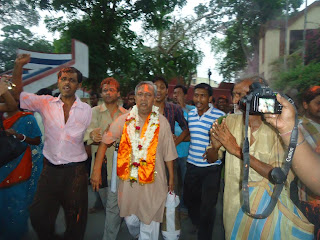