Erosion of Saffron politics sets out in Bengal 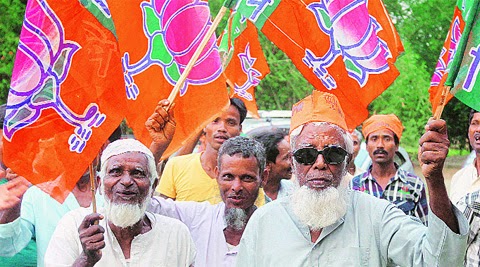 To elucidate the present state of affairs regarding Saffron politics in Bengal, there is the need to emphasize the word confusion at the very outset. Even if the word refers to bewilderment also, its most apt representation happens to be a mental state characterized by a lack of clear and orderly thought and behavior. And this lack of clear vision or myopia is affecting the Saffron camp now. Lok Sabha election held of late has led to a new political arithmetic in the state; while Left has slumped stunningly and Trinamool Congress achieved a landslide, BJP has achieved a spate of support with bagging 17.5% vote share. The saga seems to be unbelievable for the party retaining a microscopic presence in Bengal till a few weeks back. But it is a hard reality and if everything gets perfect, BJP will emerge as a major power clique soon wielding the baton of a brawny opposition. With this end in view, the party is set to extend its tentacles; members from each social echelon is joining the party’s rank and file fast. Muslims are no exception as well.


Is the political demography in Bengal really on the verge of a historic change?  Or whether the party’s new connection will seal fate of Hindus once more? Hindus, if truth be told, seem confused a lot since they were mainly the people who opted for Modi ji defying all admonitions and risks to life. According to sources, the Bengal unit, hankering after power fast, is hell-bent to pass up the tag of Hindu communalism or Hindutva and the way members of minority cell of BJP wrangled with local police and administration against the murder of Sheikh Rahim, at Ilambazar in Birbhum, skepticism can rise up. And this skepticism is within Hindus found asserting that they will be betrayed yet again for authority.

As per studies, an exaggerated zeal is being found among Muslims to join BJP both for security and the high confidence that their community’s overwhelming presence in the state (Muslims form almost 30% of Bengal’s population) is enough to make the party congenial to them. There is another factor too, if political pundits are counted on. The Islamic community loves to hobnob with the authority always and since BJP appears unprejudiced to them, the party happens to be the best refuge for the time being. On the word of press and media, hundreds of Muslim families have already joined BJP in areas like Jalpaiguri, Alipurduar, Coochbehar, Raigunj, Balurghat and Nadia and the number of new members is 50, 000 only in Jalpaiguri. The same fervor is found in South Bengal as well. Left cadres, disgruntled with the Left leadership and its flawed policies, are joining BJP in strength to challenge Trinamool Congress in future and with might.

Will these people help Hindus to create a strong destiny? The answer, if all facts are contemplated, is straight negative. They are joining the Saffron party to have share of rising success and not to help Hindus. Only on June 9 two Hindu youths were thrashed mercilessly by Arun Dey, leader of a CPM-controlled auto-rickshaw union till the last week but now a BJP leader, and his henchmen in Maniktala Main Road. These two youths played valiant roles to resist the Islamist design to erect an illegal mosque in Maniktala last year. Both are in critical conditions yet while locals are found to vent anger against BJP.