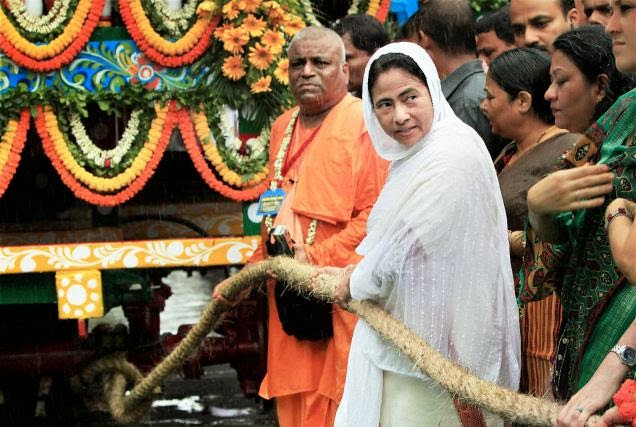 Despite the fact that Hindus in the Indian state of Bengal are on the verge of wane and religious persecutions on them by Islamists (in each way) and abetted by the weird silence, barefaced pro-minority approaches of state government are rising by leaps and bounds, Hindu religious leaders as well as organizations remain most apathetic to their lot. This came forth best on June 29, 2014 when Sm. Mamata Banerjee, Hon’ble Chief Minister of Bengal, was seen to join the Rath Yatra organized by ISKCON, along with a host of members of the state cabinet. The members included Subrata Mukherjee or the Hon’ble Minister of Village Development and Panchayat, Sovan Chatterjee or Hon’ble Mayor of Kolkata and Subrata Bakshi, MP of Trinamool Congress. Bengal Chief Minister was also seen to perform Maha Aarti of the Holy Deities of Lord Jagannath, Lord Balarama and Subhadra. Ratha Yatra or the Holy festival inaugurated once the road before the Holy Chariot was cleansed by Mr. Subrata Mukherjee with a golden-broom (emblematic cleaning of the path for chariot of Lord Jagannath).

Such a grand, Holy Rath Yatra festival is organized on each year in the metropolis of Kolkata by ISKCON or the International Society for Krishna Consciousness and is joined by hundreds of thousands of people representing all echelons of the society including foreign devotees of this globally acclaimed organization. Today, the three finely-decorated chariots commenced their journey at 12.30 pm from Park Circus, joined by devotees in large numbers, and reached the Park Street in the evening. Even if it was raining heavily then, more Hindus joined the festival with elation. To celebrate the sanctified occasion, Hindus reached Maidan or Brigade Parade Ground where the three chariots will stay till July 7 or Bahuda Yatra or Ulto Rath.

Once chariots reached Maidan, Sm. Mamata Banerjee performed Maha Aarti of the Holy Deities of Lord Jagannath, Lord Balarama and Subhadra. Along with her family, she also offered Puja to the Holy Deities. 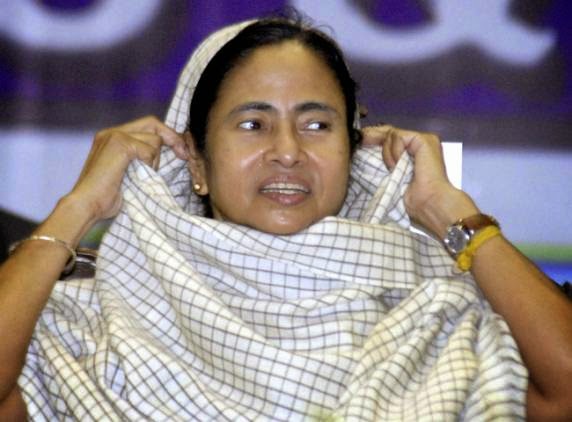 Can any such worship be performed by a person who never forgets to wear hijab to placate Muslims in the state at every opportune time? Even since her ascension to the position of Chief Minister of Bengal in 2011, Sm. Mamata Banerjee has left no stone unturned to appease Muslims in Bengal and this has been found by either wearing hijab or participating in Islamic festivals. It must be kept in mind that hijab is a headscarf worn by Muslim women beyond the age of puberty before adult males outside of their immediate family members. Apart from this, Bengal under the rule of Trinamool Congress has remained witness to burgeoning assaults on Hindus, their religious beliefs along with properties and women in particular, by radical Muslims. Ravishment of Hindu women by Islamists is getting common more and more and the venom has engulfed the entire state already. 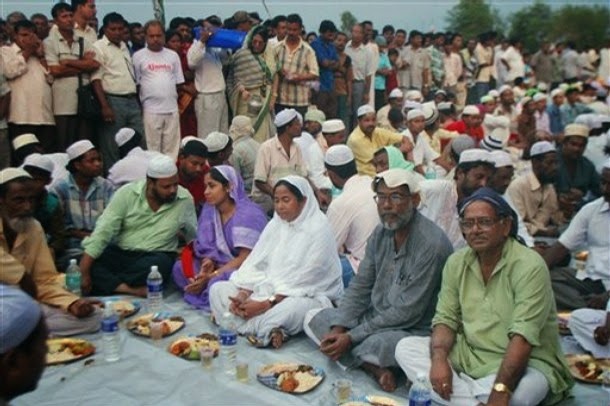 The ignominious episode of gang rape and murder of Shipra Ghosh by radical Muslims on June 7, 2013 in her own village of Kamduni, within Barasat police station’s (then) jurisdiction in the district of North 24 Paraganas is yet to be forgotten while the maimed soul of the innocent Hindu girl is yet to get justice. Thousands of such atrocities on Hindus have occurred and the horror is increasing with each day it passes. How can ISKCON or a Gaudiya Vaishnava religious organization invite such a rabid pro-Islamist individual to perform Maha Arati at Rath Yarta festival Kolkata, 2014.

The performance has hurt Hindus; protests are being found in different quarters of Hindu society against such a brazen act.

Anonymous said…
Thank you Sir, to know me about haj Committee details. i was looking forward to go on HAJ Yatra. Can you share me complete details of HAJ Package which is starting from 15th of November. and also details more details of hajcommittee.gov.in and how to apply for it in easy way. Nice details sir.